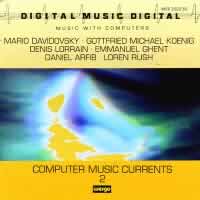 Each series number is a collection of computer music, but each of them tries to investigate a specific topic such as a composer, a historical period, and so on.

This volume, for example, collects 6 music works composed in some of the most important centers devoted to computer music research.

The first piece is a composition of the Argentine composer Mario Davidovsky,  who in the early Sixties began a work series with electronic and traditional instruments. With Synchronisms No. 9 (1988) Davidovsky introduced the computer beside the violin of Rolf Schulte, for a MIT commission. In addition to a MIDI system of the prestigious university, the composer used others device of the Columbia electronic music center, and Csound for the sound synthesis. Synchronisms No. 9 is a very interesting music, thanks to a great energy derived from the interaction between the two instruments, and for the contrast through a contemporary music language and romantic reminiscences.

Less fascinating the work of Gottfried Michael Koenig, Three ASKO Pieces (1982) for flute, two clarinets, two trombones, bassoon, saxophone, marimba, piano and string quartet. I would underline a difference regarding the working method, in fact this is computer assisted composition, without synthesized sounds, in which score is obtained by the computer through a software, named PR1, and a set of rules, in a similar way to the historic Illiac Suite by Lejaren Hiller. Thanks to the Project1, designed by the composer itself, he realized three different versions of a global project ideated for the ASKO ensemble, based in Amsterdam.

More complicated is the software group adopted by Denis Lorrain for …black it stood as night (1985). This piece was realized in real time with algorithms programmed in VLISP, Formes and C. Lorrain used also software such as Cmusic, Pvoc, Chant, and the Ircam 4X system. The CD version is a loudspeaker reduction, without the percussionist of the original version.

A reduction is the next work also: Phosphones (1970/71) by Emmanuel Ghent. This is a very complex project based on two tracks: one of music realized with the Groove system, and a lighting controlling score, computer realized also. The overall project, a commission of the Mimi Garrard Dance Company, foresee the synchronization of the first two elements with a choreography of dancers, realized by Mimi Garrard. The latter, together with Arnold Eagle, has realized a documentary. The CD version contains only the musical part.

Daniel Arfib is a researcher who worked in Marsiglia with Jean-Claude Risset at the Laboratoire de Mecanique et Acoustique of the national center for scientific research (CNRS). During the Seventies he developed a Music V implementation for the Telemecanique minicomputer, and in the Eighties a PC compatible version. His musical career has been less know but  Arfib composed some works of computer music as Le Souffle du Doux realized with the Music V, but it isn’t a very interesting composition, musically and sonically.

On the other hand A Traveling Music (1971/73) by Loren Rush is much more appreciated for his sonic material – considered the year of composition – with a very interesting combination of the electronic part with the piano of Dwight Peltzer. Magnetic tape was realized at the Center for Computer Research in Music and Acoustics in Stanford (CCRMA), with the Mus10 and two particular synthesis procedures: the simulation of moving sounds, and an extended version of the Frequency Modulation for the moving control. Even the piano plays a beautiful part with a fast drone of partials of the fundamental.