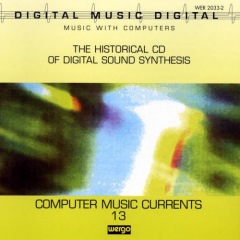 A collection of the first computer music experiments between the mid-Fifties and the mid-Sixties.

For those interested to electronic music history, this Wergo collection it is certainly a valuable edition of almost all the first experiments in computer music realized at Bell Labs.

In addition to a discret number of tracks, this collection has a 250 pages booklet, with many information and others historical papers. But, we continue with calm.

All the songs presented in this CD were realized between the 1957 and the 1965. 17 tracks of many people, linked in various way to the birth of computer music. So, we can find experiments of Max Mathews, the father of computer music, John Pierce, James Randall, David Lewin, Ercolino Ferretti and many others.

Among those just now mentioned, the most interesting experiments are that of Ferretti, for their sonic performance; despite Ferretti has underlined as  Trio (1965) and Pipe and Drum (1963) were only experiments. Ercolino Ferretti in the Seventies contributed to computer music also in collaboration with Vladimir Ussachevsky.

Among the all experiments, some previously presented in Music from Mathematics, we must talking necessarily of The Silver Scale (1957) by Newman Guttman. Only 17 seconds of strange sounds but the first piece synthesized with a computer at Bell Labs, and one of the first all over the world.

Among the others tracks, it’s important to remember Dialogue (1963) by James Tenney which was one of the first professional composer to visit the Bell Labs, collaborating with Max Mathews. Dialogue is a music for two parts: a melodic line and a noise track. The computer, in according with rules choices by the composer, select frequency and duration of the two voices.

If you want to listen all experimental tracks of this CD, visit the musicainformatica’s channel on You Tube.

But the 17 tracks contained in this CD, aren’t the only musical material of this Wergo collection. From 18 to 45, in fact, you can find a series of sound examples realized by Jean-Claude Risset for his catalogue of computer synthesized sounds.

Earlier, I’ve written about a rich booklet attached to the CD, where we can find first An Introductory Catalogue of Computer Synthesized Sounds written in 1969 by the French composer, and researcher, during his experience at Bell Labs. It is a sound examples catalogue, based on Music V musical software. These examples helped to understand how synthetize with the computer a specific sound, timbrical solutions, or a particular effect. For this, inside the book you can find the flowchart of every sound example, and the Music V programming code. Today this catalogue is an interesting document for historical reasons, but in that years it was a sounds library.

On the web I’ve find an italian translated version, that you can download here.

Over the Risset Catalogue, the booklet collects many historical papers. First, an interesting recollection of John Pierce, who tell us of the early years of computer music, noting the many people who contributed to those experiences. The title is Recollections by John Pierce, an updated version of a previous article published in 1991 on Computer Music Journal, and titled Recollections with John Robinson Pierce.

After, we have others articles, already published but hard to find. The first is Generation of Music by a Digital Computer by Max Mathews and Newman Guttman, initially presented at the 3th International Congress on Acoustic. in Stuttgart in 1959. This is the first paper published after the experiments realized in 1957.

As much interesting, are two papers originally published on Gravesaner Blätter, the journal of the Gravesano’s encounters organized by Hermann Scherchen in Switzerland. Between 1962-1965, were present also the Bell Labs staff; they presented a paper titled Musical Sounds from Digital Computers, by Max Mathews, John Pierce and Newman Guttman; the second year they presented Further Experiments on the Use of the Computer in Connection with Music, by Mathews and Jean-Claude RIsset.

The last, is an article published in 1963 on Science, and titled The Digital Computer as a Musical Instrument; a very interesting release, because it is the first popular writing on computer music. Max Mathews explains how to make music with a computer. Symbolically, this is a written who throws the computer music beyond the research centers walls. If you want to read this paper, click here.