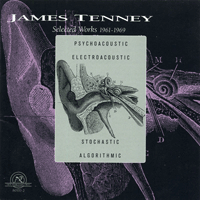 Although it was one of the pioneers in computer music, for many years his name has been associated with this field of music just for two works: Analog # 1 (Noise Study) and Stochastic String Quartet, which were published in the album Music from Mathematics.

In fact, as demonstrated by this collection, his computer music is affected by various other works. Compared to the topic of computer music, the collection in question presents one exception: Collage #1 (Blue Suede). This, in fact, is an analog work done through the assembly of musical materials drawn from Elvis Presley’s Blue Suede Shoes, that Tenney realized during his stay at the University of Illinois, where he resided before moving to Bell Labs.

The first piece of computer music, then, is Analog #1 (Noise Study) (1961) composed at Bell Laboratories (Bell Labs) with the Max Mathews’s Music III. This is a work of considerable historical importance, since it is considered the first piece of computer music (with synthesized sounds through the computer) made by a professional composer. In previous years there are only experiments and studies conducted mainly by researchers with different backgrounds.

The collection continues in chronological order with Dialogue (1963), also made with the Music III, the third version of Music N. The name is intended to be evocative of a comparison report between pure tones and noise bands that, in fact, dialogue between them.

In the same year, Tenney composed Phases (for Edgard Varèse). It is considered one of the most complex work that he has ever made but also among the most popular. For this work Tenney also developed a computer routine, PLF5, that was implemented with the Music III using to synthesized the sounds.

Phases also provided material for later work entitled Ergodos II (for John Cage) (1964), for which reused the code listing of the algorithms used in Phases (Tenney reused the all instruments designed for the previous work).

Between the two pieces, however, stands Music for Player Piano (1963-64). For this work, the computer was used to specify the values of duration, pitch and density of sound. The sound material produced was used to drill a roll of paper (piano roll) to “read” by piano. This could be done by placing it in four different ways: forward (original), forward-upside down (inversion), backward (retrograded) backward-upside down (inversion retrograde). In the specific case of this recording (you can see on the left side) the piano roll was placed first in its original form, then read the retrograde, the inverion, and finally the retrograde of the original.

Getting back to Ergodos II, dedicated to John Cage, it must be said that this was the last work done by James Tenney at Bell Labs. The material obtained through the computer, once recorded on tape, could be performed either in one direction than the other. A change from previous work is the use, for the first time, of stereophonic channels.

Although Tenney had left Bell Labs in 1964, even Fabric for Ché (1967) is related to his experience with Max Mathews. Indeed, although made at the Brooklyn Polytechnic Institute, the sound materials used for this work were originally synthesized at Bell Labs. Fabric for Ché is characterized, then, for the palindrome structure: the second part, in fact, is the inverse of the first, a technique that had already been adopted by Tenney in Music for Player Piano.

The collection closes with the song For Ann (rising) (1969). For many it’s one of the most representative works by James Tenney. For Ann has been associated with psychoacoustic experiments conducted by psychologist Roger Shepard at Bell Labs. Shepard had theorized the so-called infinite glissando, or Shepard’s Tone, an auditory illusion that transmits the sensation of a tone without end. Even Jean-Claude Risset has proposed a personal version that will be remembered as the Shepard-Risset Glissando. In the case of For Ann, however, we are dealing with an ascending glissando consists of sounds spaced at intervals of a minor sixth. Start with frequencies in the range of infrasound and then move to the ultrasound. The version presented in this collection was created by Tom Erbe with Csound, based on specifications provided by James Tenney.

The CD is accompanied by a thick booklet, edited by Larry Polansky, which contains numerous biographical, bibliographic and technical information.