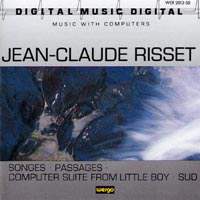 This CD, published by Wergo for the Digital Music series, is a collection of some work that has made by the French composer from the late sixties to the first half of the eighties, in various contexts such as Ircam, Bell Labs, Marseille and the Groupe de Recherches Musicales.

The transition between one center to another has meant that the composer could explore the use of different systems, at least in terms of hardware. As regards, however, the software used, we see mainly the use of Music V, although in different versions.

The collection opens with Songes (1979), realized at Ircam through the Music V and a PDP-10 computers. The version of Music V used by Risset not is that developed by Max Mathews, but a modified version by John Gardner and Jean-Louis Richer. Songes is a work that uses both recorded and synthesized sounds. The beginning of this song is given to instrumental sounds recorded on tape. The remaining material was completely synthesized through the computer, although has not been used for its organization. Another important element is the spatialisation, also realized through the Music V. Songes makes a very close relationship with a previous work by the composer: Mirages (1978), and can be considered as a revision, the shortest, of the third movement by the latter. An interesting technical and formal analysis of this work was carried out by Lev Koblyakow (Jean-Claude Risset – Songes (1979) (9’) in Contemporary Music Review, Vol 1 [1], 1984, pp. 171 – 173.)

The second song is Passages (1982), for flute and tape. Realized in Marseille with the collaboration of the flautist Pierre-Ives Artaud, Passages has been commissioned by the Venice Biennale at the International Computer Music Conference held in Venice in the same year. Again, Risset synthesized the sound material through Music V but with a Télématique T1600 computer. The title of this song, in the words of the composer, shows the changing sound environment created through the computer; highlighting the attention of the composer to the blend of synthetic sounds and traditional instruments, as he had already experimented with Dialogues (the title speaks for itself), Inharmonique and Profils.

The third song, a well-known work, was composed during the early formative years spent at Bell Labs alongside Max Mathews. Computer Suite from Little Boy (1968) is not only one of the early work of Jean-Claude Risset, but is also among the early works of computer music in which sounds were synthesized entirely with the computer. Made with the Music V, Computer Suite is divided into three sections and is, in fact, expression of the many sound experiments conducted by Risset between 1964 and 1968. In the second movement, for example, you can listen the use of the Shepard’s tone. In this regard, Computer Suite is often considered more as a study. The origins of this work, however, are in the music scene composed by Risset for the work Little Boy by Pierre Halet.

The collection closes with a song that Risset has made at Groupe de Recherches Musicales (INA/GRM) direct, in those years, by François Bayle. Sud (1984/85) was commissioned by the French Ministry of Culture. Most of the sound material is of concrete nature, result of recordings made near Marseille. This material are combined with synthesized sounds, realized through computer and some software developed by Benedict Mailliard and Yann Geslin at GRM. For the spatialization of sound has been used the Acousmonium. A detailed analysis was carried out by the same Jean-Claude Risset (Une musique numérique hybride, Cahiers du CPRIM, 1987.