AA. VV. – Cybernetic Serendipity: The Computer and the Arts 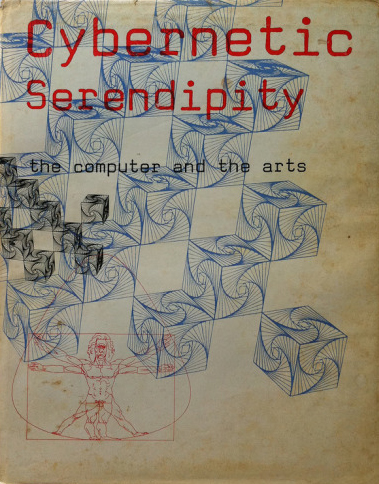 Cybernetic Serendipity is the title of an exhibition that I have elsewhere referred to as a cult event for those interested in using art technology. In 1968 the artist and curator Jasia Reichardt conceived the project for a major exhibition, whose goal was to show in what way the man could use the computers and new technologies to extend their creativity.

The uniqueness of this event is that until then the marriage of art and technology was celebrated only in research centers, institutes and high-tech studio, where the collaboration between artists and engineers was held with an experimentation perspective.

… Cybernetic Serendipity, dealing broadly with the demonstration of how man can use the computer and new technology to extend his creativity and inventiveness.

The opening to the public of Cybernetic Serendipity, then, could be hailed as a great event, of which still preserves a strong memory.

The exhibition was structured without any distinction with respect to the arts represented: music, visual arts, video, still images, literature, any artistic discipline that could accompany the word computer had every right to be represented at the event organized by Jasia Reichardt.

English but of Polish origin, the Reichardt planned an event lasting nearly three months, from August 2 to 20 October 1968 at the Institute of Contemporary Arts in London, for which he had been appointed Assistant to the Management.

Although my date of birth does not allow me to be present at the exhibition, the quality of the projects submitted and the names of the personalities involved allow to guess that Cybernetic Serendipity was designed from the beginning as a great event. For this reason Jasia Reichardt over staging conceived and oversaw the publication of two reports: an edition of the music on the disc and a book.

Within Cybernetic Serendipity music occupies an important position, also by virtue of the fact that the computer music, in that in 1968, it appeared as a field of research now consolidated, with nearly twenty years of experiments and works of various generally, in terms of software developed music and works composed.

The music section of the project was curated by Peter Schmidt, a German artist based in London, a pioneer in the use of multimedia and promoter, in 1967, of a performance entitled A Painter’s Use of Sound.

Of the LP edition I wrote in June 2014 in an article which you can read by following this link, where you can listen and download the songs in the collection. Here, however, I want to write about the paper publication accompanying the exhibition in London, a volume of over 100 pages, edited by Jasia Reichardt and published as a special issue of the art magazine Studio International.

The book contains speeches of prominent personalities in the field of computer music. It is mostly composers, pioneers in the use of the computer tool, as Lejaren Hiller, Herbert Brün, Peter Zinovieff e James Tenney, but there are theoretical and technical as Joseph Schillinger, John Pierce and the mathematician O’Breine. Finally, there are also an intervention of John Cage (who in those months was working at the realization of HPSCHD) and Karlheinz Stockhausen, although the latter had never made use of the computer in those years (the first time of Stockhausen with a computer will be with the UPIC system by Iannis Xenkis).

Just the article of Stockhausen shows the intention of the curator to embrace issues much broader than the simple practical application of digital technology in music. In fact the writing of Stockhausen provides an opportunity to reflect on the relationship between the traditional compositional approach and certain methodologies introduced in musical thinking with computer tools. Reflections are very similar those stimulated by the article that opening the music section, written by Joseph Schillinger, author of two famous publications The Schillinger System of Musical Composition (1946) e The Mathematical Basis of Arts (1966), with which showed – in advance on the pioneering experiments of computer music of the fifties – in what way mathematics could find a good application in creative thinking music.

About pioneering, although it is absent an article of the father of computer music, Max Mathews, the curator Jasia Reichardt has seen fit to accommodate an essay by John Pierce, who was a collaborator and before proponent of research on computer music at Bell Labs New Jersey, where he developed the first software of the Music N family.

If the writing of Pierce is rather technical and presentation of the digital instrument, much more interesting, musically, are the articles of some composers protagonists of the first digital revolution: Lejaren Hiller, Herbert Brün e James Tenney, who expose the results of their activities, focusing on the composition aspects of their work in computer music.

Completely different the article of Gerald Strang, Peter Zinovieff and John Cage; who, despite having experience in terms of composition, they prefer a technical approach and analytical use of the instrument in digital music – the first two – and within the visual art – John Cage.

Closes the session music, also with an article rather technical, Thomas Hay O’Beirne, Scottish mathematician, one of the pioneers of computer music in Britain, who created a software called Orpheus.

For those, like me, have not had the opportunity to attend the event, we can be satisfied with the digital version of the book edited by Jasia Reichardt and that may be found through this link, or simply you can read and download right here on musicainformatica: