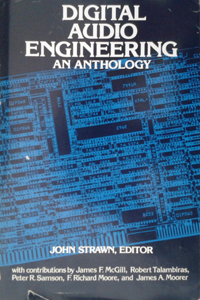 The title of this book tells us much as regards to the topics treated within the volume edited by John Strawn for the Computer Music and Digital Audio series.
Compared to other titles of the same series, Digital Audio Engineering is more oriented towards digital audio rather than to computer music history and compositions of musical works. It is a very technical book subdivided, ideally, in two sections: one dedicated to the digital audio fundamentals, another to the review of three computer music systems.

The first chapter by James McGill, An Introduction to Digital Recording and Reproduction, it’s, as suggested by the title, focused on the recording technical features and reproduction of digital audio, although the word Introduction could confuse the reader looking for general information. McGill deals with this topic in a technical manner, integrating the text with graphs, flowcharts, circuits representations and a lot of maths that emphasize the engineering approach.

Same speech for the second chapter, written by Robert Talambiras: Limitations on the Dynamic Range of Digitized Audio. The only difference is that this chapter is focused on a topic more specific, related to noise problems for the digital audio.

With the third chapter begin what I called second section, deals with the presentation of some computer systems designed for composing music, and not only. In the following three chapters, in fact, is presented firstly the Systems Concepts Digital Synthesizer, one of the early digital synthesizer driven by a computer, designed by Peter Samson and for this reason well-known as Samson Box. Then is presented the FrmBox, a synthesizer designed by Richard Moore and, finally, the LucasFilm’s digital audio system.

Peter Samson’s chapter, Architectural Issues in the Design of the Systems Concepts Digital Synthesizer, present the major features of his digital synthesizer. No mention of its use in musical compositions, in so far this paper is focused on technical features in order to demonstrate its potentials. The same is for the second chapter by Richard Moore, The FrmBox – a Modular Digital Music Synthesizer, a machine designed for the Stanford University. We must remember that Richard Moore had collaborated with Max Mathews at Bell Labs for the achievement of the hybrid synthesizer Groove, to which the author often refers.

The last chapter, written by James Moorer, is titled The LucasFilm Digital Audio Facility. The author present the overall structure and all devices that form the digital audio system developed in the 80s for the famous American film production company. Its realization was assigned just to James Moorer that, beyond the presentation of the technical features, does some considerations on specific audio requirements for film industry.