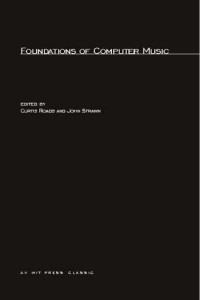 A few weeks ago I wrote for another publication very similar to this and always taken care of by Curtis Roads. In fact, The Music Machine The Music Machine is actually a collection of articles that follows of a few years Foundations of Computer Music, published in 1985 in collaboration with John Strawn, an expert in digital audio and digital synthesis of sound, here the pdf of the first chapter.

Again it should be stressed for the great effort accomplished by Curtis Roads to selected the most interesting articles appeared on Computer Music Journal from the second half of the seventies and 1980, then divided into specific topics, in order to provide a useful informative tool capable of satisfying the most knowledgeable people as those who move for the first time in this particular field of electronic music.

In addition, as Curtis Roads writes in the preface to the book, it is a publication that does not require the reader to have any special skills just past, in order to emphasize the ability to offer this book to anyone. If anyone cares to read the preface here, which follows the introduction written by Max Mathews, considered the father of computer music, thanks to his work on Music N.

From a reading of the index only, we realize how the book is divided into distinct sections:

What is lacking, but which we can find in the book The Music Machine, is a section devoted exclusively to musical composition.

In fact, what characterizes this volume is that it is oriented more in the technical sense, as the rest can be understood from the first chapter, which discusses in detail some of the most important techniques of synthesis. Among the most interesting articles in this section we can not forget to mention at least Granular Synthesis of Sound by Curtis Roads and The Synthesis of Complex Audio Spectra by Means of Frequency Modulation of John Chowning, stressing that most of the other articles of this chapter are devoted almost all the frequency modulation.

The second chapter is very interesting from a historical perspective. In fact it presents some digital synthesizers developed in the early decades of computer music, such as the DMX-1000, or the 4B and 4C designed by the Italian physicist Giuseppe Di Giugno. The articles are divided among writings that investigate the technical and technological features of some digital machines and others that explain the operation in computer terms.

If the second chapter focuses on the hardware, the third is focused on the software. In truth, this section is best developed in the publication The Music Machine, because in this case it seems rather confusing, less coherent, or more simply, very technical, certainly interesting for a computer engineer, much less for a music lover. The only article that in fact interested me is the interview with Gottfried Michael Koenig, illustrating a minimum career and experience of the German composer.

The book closes with three articles dealing with the issue of perception and digital signal processing of sound. Also in this case it is quite technical arguments, however, are very interesting on a musical level, especially for those who wish to deepen the use of the computer in music.

Beyond all, Foundations of Computer Music is definitely a very important book to approach computer music from a historical point of view but also from technological and computer. Definitely recommended for those taking their first steps, particularly for those interested in the historical perspective. To get some idea about the possible topics I leave you with the link to the index of names.