Heinrich Taube – Notes From the Metalevel: an Introduction to Computer Composition 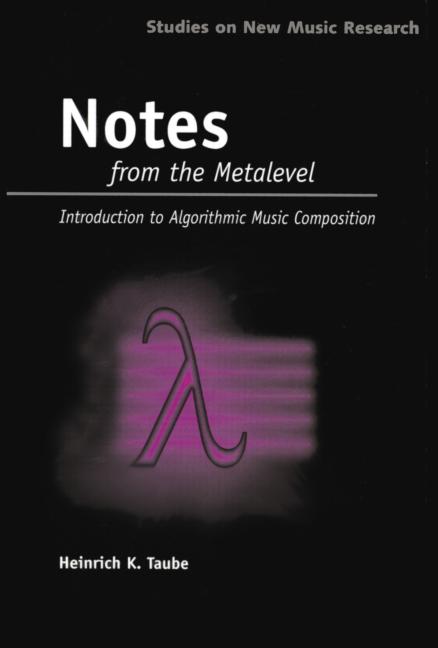 Heinrich Taube, Associate Professor and Chair of Composition-Theory at School of Music of the University of Illinois, studied at Stanford with John Chowning and Leland Smith, then electronic music with Hans Peter Haller. Throughout his years at Stanford, Taube experiment the music composition through the Samson Box, before developing a personal software for computer music called Common Music, programmed in Common Lisp, a dialect of Lisp.

The reason for this premise, talking about this book, is that it is presented as a manual to study the musical composition through the use of a computer and a programming language like Common Music, so much so that Taube, in the indications for a good use of the manual, writes that:

The best way to read Notes from the Metalevel is to run the Common Music application in parallel as you study each chapter. This will allow you to test out each interaction and experiment with the programming examples as you encounter them in the book.

This book introduces the reader not only to the use of a free and open source programming language for music, ìbut more generally to musical composition through the computer, beyond the software used.

Inside you can find a large amount of samples, also collected in the CD that accompanies the publication.

Ideally Taube’s book is divided into two sections: the first, consisting of 9 chapters, provides an overview of programming in Lisp, and introducing notions of historical character; the second, between chapters 12 and 24, is presented by the author as an introduction to the basic concepts for musical composition through the computer. In these chapters the author also looks at characteristics of the sound and algorithms.

Secono Taube, one of the strengths of his book is to be suitable for a very wide audience, which brings together students who are taking their first steps, with expert programmers interested in exploring musical applications of computer science. In addition, he would point out that the strength of a language such as Lisp lies in its being easily understood even by those who do not have great familiarity with this type of code.

A really interesting section, however, consists of chapters called Etudes, in which Taube presents more complex projects to investigate specific technical issues, from how to make scores using lists of Midi events to how implement algorithms capable of repeat some fetures of Piano Phase by Steve Reich.

Notes from the metalevel was published in 2005, but in addition to being available in the paper version, Taube’s book was published free in a HTML version, that you can find here. Of the latter version I thought I’d make one version in pdf format, easy to consult offline, that you can browse, or download directly here:

If you are interested to the software developed by Taube, please read this page in the Resource section.