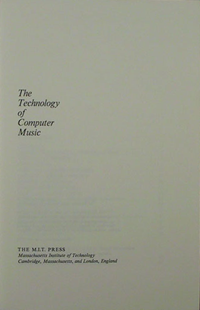 For a long time, The Techonology of computer Music was a reference text for most of the pubblications in computer music prior to the mid-eighties.

Unlike what you think, it is not a generalist pubblication but a very specific and technical book. It was written, in fact, to support the last software of the Music N’s family: the Music V, developed by Max Mathews at Bell Labs in 1969.

An interesting aspect of this version, compared to its predecessors, was to have met a large diffusion in the United States and Europe, and for this there was the need to write a reference text for those interested in using the program. Among the many centers that used it, at least we mention the Ircam and the Groupe de Recherches Musicales in Paris and the Centro di Sonologia Computazionale in Padua, Italy.

Written with the collaboration of Joan Miller, Richard Moore, John Pierce and Jean-Claude Risset, this book is structured in three chapters, the first of which is the only one of general content and it is dedicated, in fact, to the fundamentals of digital audio, with topics that ranging from issues relating to sampling and quantization to the functioning of ADC and DAC conversion.

The most important feature of this book, however, is that configures it as a user’s guide for the Music V. So, for this reason, the next two chapters are devoted entirely to the software of Max Mathews.

In particular, the second chapter, gathers several tutorial of increased difficulty, to attend the user in the correct use of the software.

The third chapter is entirely structured on the reference user manual, with an introduction that analyzes the differences between the Music V and its predecessor, the Music IV. In this chapter, furthermore, are analyzed the various subroutines that belong to the software.

Two appendices complete the book: the first dedicated to the topic of music and psychoacoustics, written by Max Mathews and John Pierce; the second, finally, focuses on mathematical issues that are useful for music composition trough the computer. The attached pdf contain the book’s index.