iGendyn, a homage to Iannis Xenakis

iGendyn is an iOs app based on a stochastic process called GENeral DYNamic and developed by Iannis Xenakis in the early Nineties.

In the early Nineties the Greek composer Iannis Xenakis expands his stochastic methodology applied to music composition thanks to a new algorithm synthesis which he named general dynamic stochastic synthesis implemented in a new software called GENDY (GENeration DYnamic). Xenakis used it for the realization of Gendyn301 and Gendyn3, about which I wrote in this post..

I don’t want to write of technical problems, or leave the main subject to examine question about Xenakis; but I want to underline as a simply app for iOs devices has very interesting cultural roots. iGendyn was designed by Nick Collins, of Durham Univerisity, that we remember for his recent publication on electronic music.

iGendyn is a polyphonic synthesizer which works in accordance with multi touch response and with the accelerometer, so it can consider the smartphone movements. Sound synthesis is designed on Xenakis’s synthesis algorithm.

Touching your iPhone, you can control loudness (acting on the x axis) or frequencies (y axis). 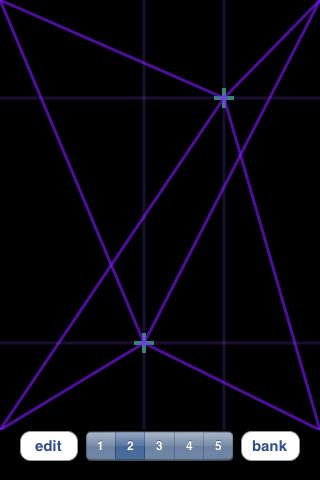 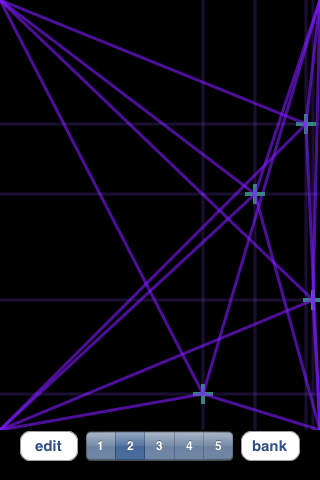 Smartphone movement is very important for a correct approach to this app. In fact, a good practice when you use iGendyn is to put your phone, flat in front of your body, with the long side that move away from you. So, with the accelerometer you benefit of the all features of iGendyn and control others parameters such as frequencies range, for example.

A double touch opens menu, where user can modify some parameters such as synthesis algorithm or control points. 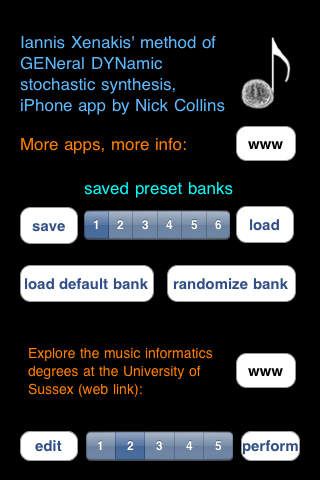 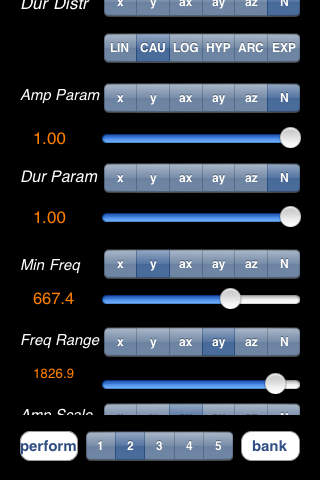 What are control points? They are, probably, the most interesting part of synthesis engine. Imagine to draw a waveform with a certain number of anchor point, whose position is refreshed according to a stochastic distribution. Hard to understand? Do you imagine to explain??

I think this: take your phone, go to the iGendyn official page on Apple Store, download the App – it is free – install and try. Easier, right?