Some time ago I wrote an article about HPSCHD, a great multimedia performance created by John Cage and Lejaren Hiller in 1969, and designed to celebrate the centenary of the University of Illinois at Urbana-Champaign, where in previous years were realized important experiments in computer music, like the Illiac Suite, and this motivated the idea of creating a work that foresaw the use of computers.

Writing that article, to which I refer the reader who wants to deepen the technical, historical and artistic features affecting the HPSCHD project, I was able to find several pictures that I would like to repeat in this new issue of the series Photostory, thus continuing the work already presented with Pietro Grossi, Luigi Nono and Iannis Xenakis. 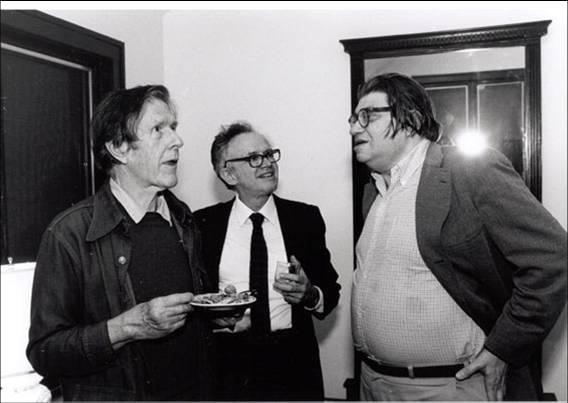 In reading the various articles, and books who are writing of the project HPSCHD, even when taking the direct testimony of the two protagonists above, it is unclear whether the idea of a work to be carried out through the computer was of John Cage or whether he is was invited by Lejaren Hiller, who was already working for the University dell’llinois. In this photo, Cage and Hiller are portrayed along with Morton Feldman, right. Copyright by Irene Haupt. Via University at Buffalo The Music Library 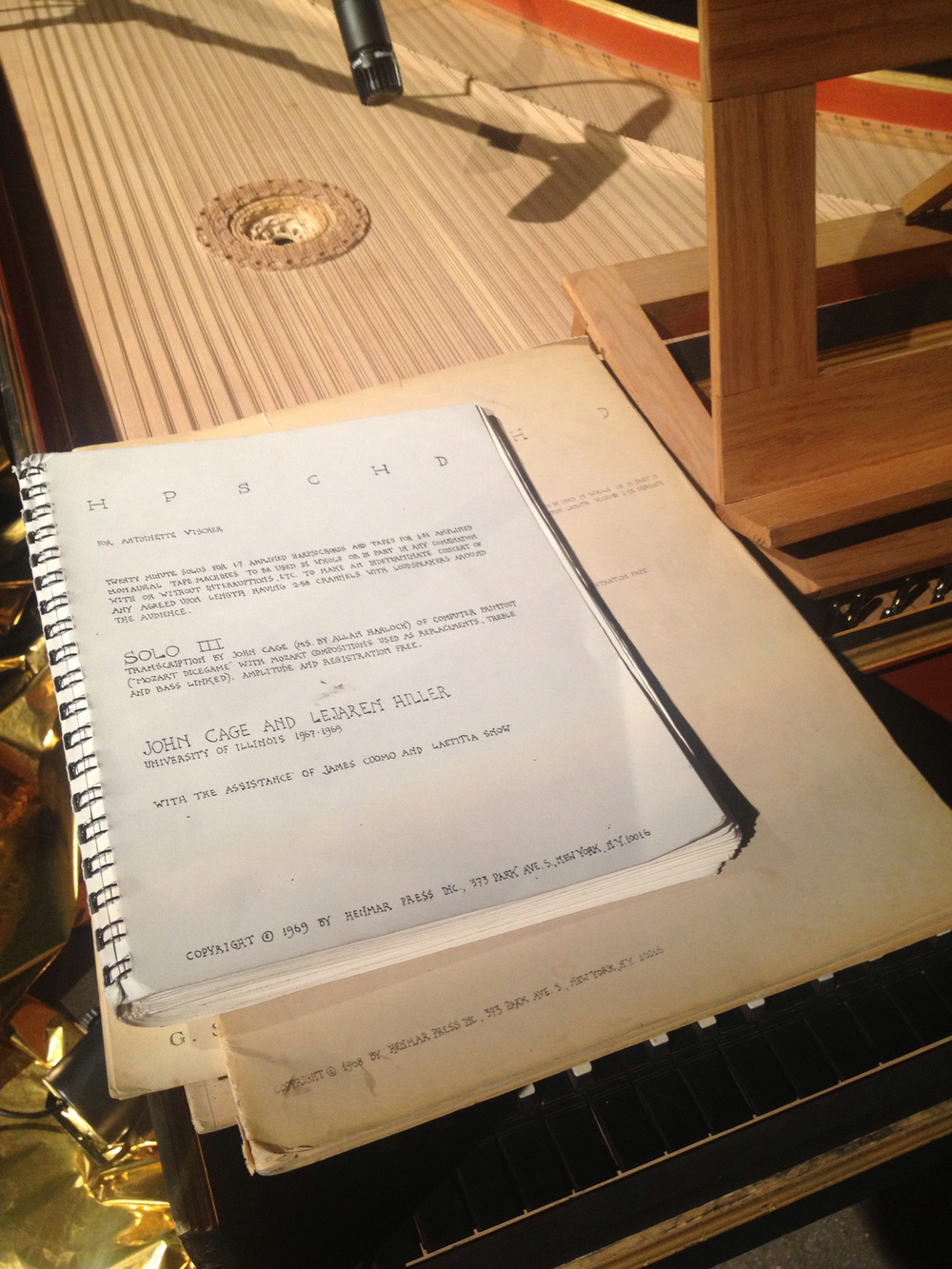 Beyond those who have first created a great multimedia performance that exploited the potential of the computer, we know for certain that initially Lejaren Hiller would have to play the role of simple collaborator, supporting Cage in the realization of the work. Indeed, it was the latter in its request that the credits for HPSCHD were recognized both. Evidently support Hiller eventually went beyond that of a mere engineer. In the picture the first page of the first edition of HPSCHD, in a revival of these years. 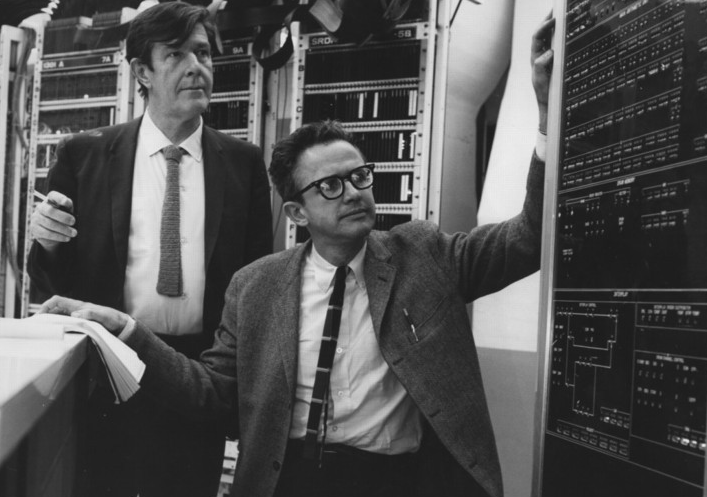 Probably could only develop as a work for four hands that of Hiller and Cage, as the latter had no experience and knowledge of computer, although it was also a pioneer of electronic music. Hiller, however, already in the fifties had made the Illiac Suite, the first work through a computer. In the image the two composers are fiddling with electronic devices, probably digital, of the University of Illinois. 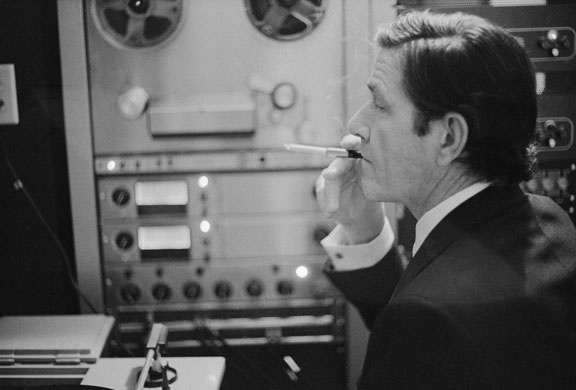 Another image of John Cage in a studio for electronic music. I’m not sure whether it is the same situation as the photo above, however, the clothing, the hair and the condition of the cigarette suggests that this photo was taken at the same time. 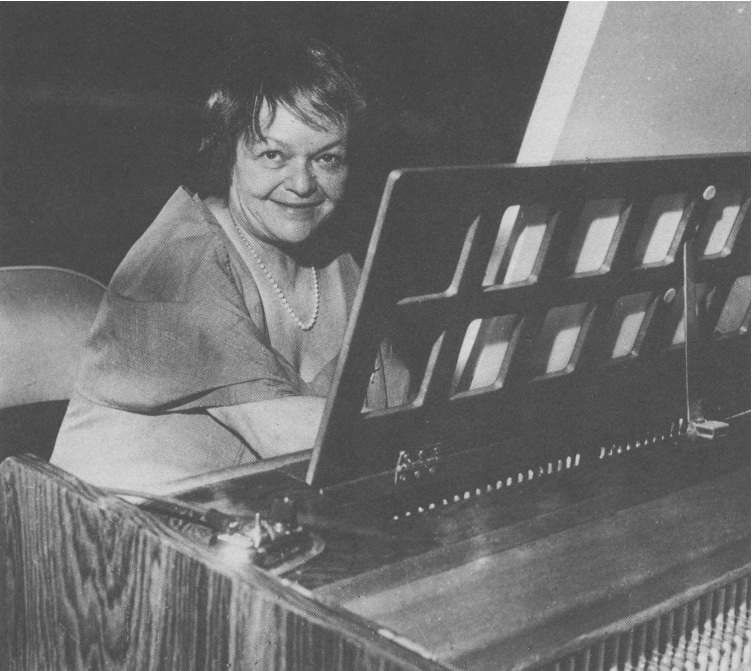 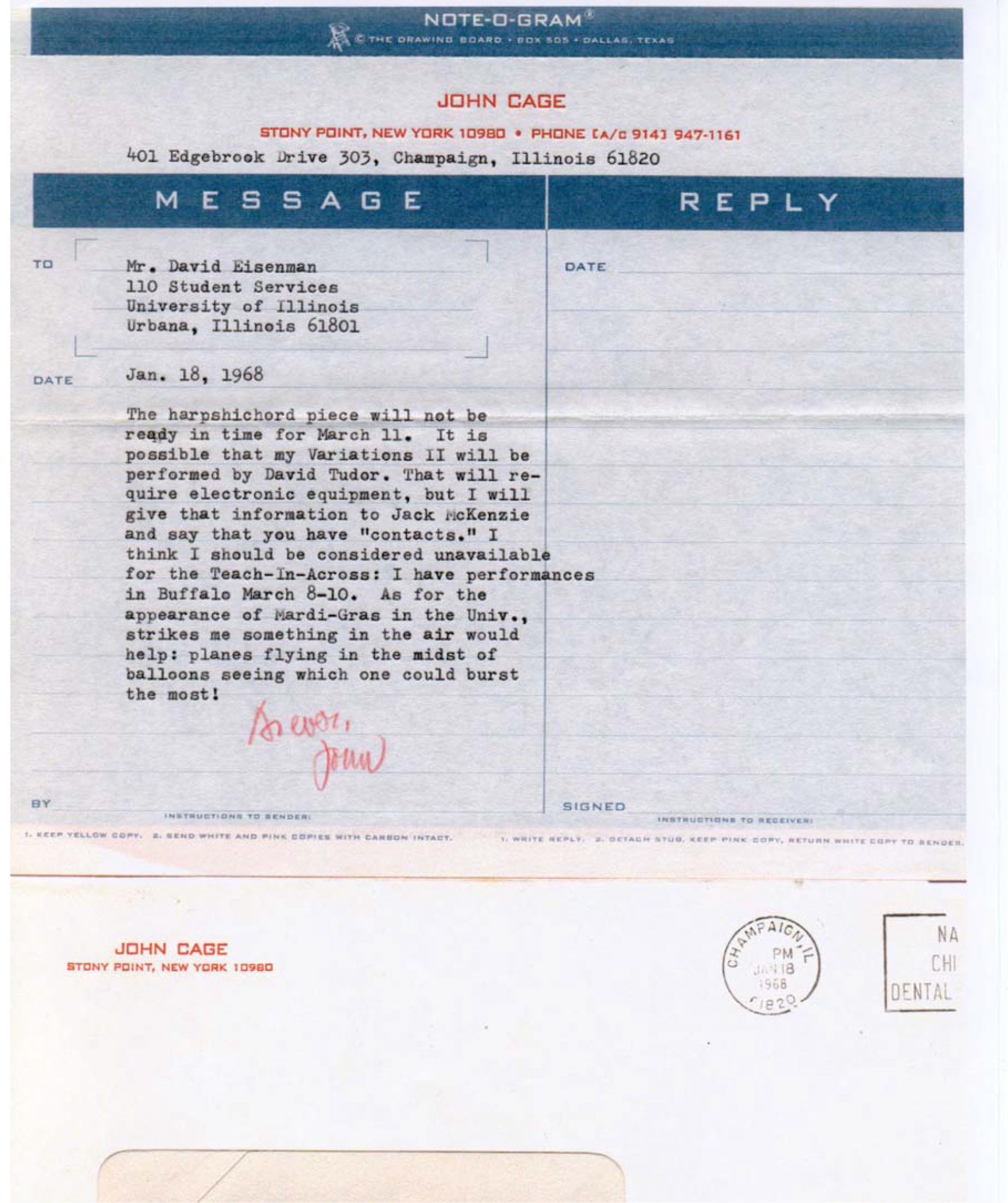 Telegram from John Cage to David Eisenman, of the University of Illinois. Cage warns him that HPSCHD would not be ready for 11 March 1968. It took longer than expected to complete the work, also because of the many artistic figures involving, for this reason HPSCHD is dated 1967/1969. Courtesy of David Eisenman (copyright by John cage). Via John Bewley 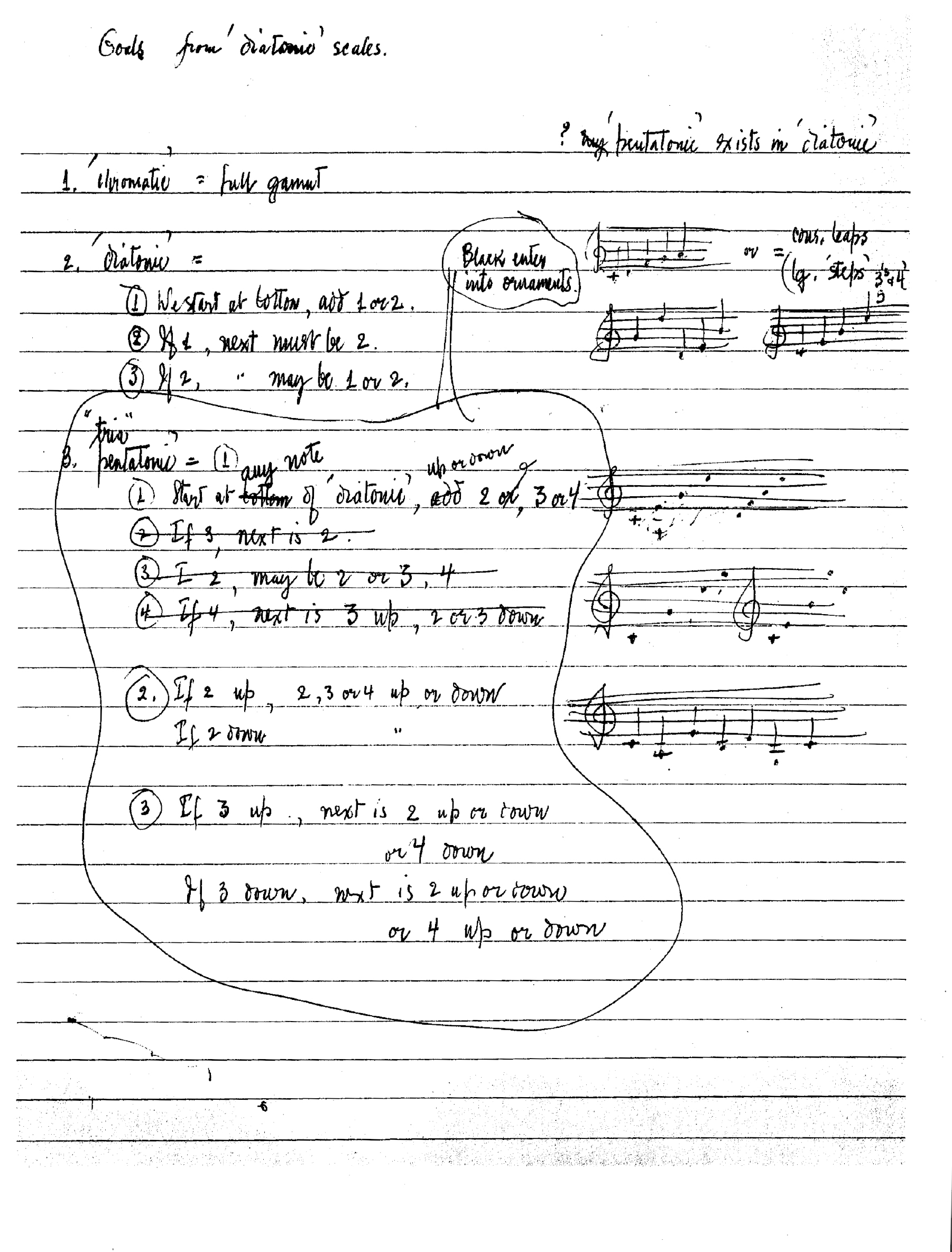 The reproduction of a manuscript on which there are musical notes for the parts to be realized with the computer. The big delay in the work was presented, as I mentioned, it was certainly due to the many professionals that the multimedia project called into question, but it should not be forgotten that the music would be especially complex. In fact they were planned to be implemented in computer parts but also parts to be shot by other works already known.

A timeline of the composers used in HPSCHD, with their dates of birth and death. On the right a series of alternatives for a possible replacement of Ives. Manuscript Collection of John Cage’s New York Public Library in New York. 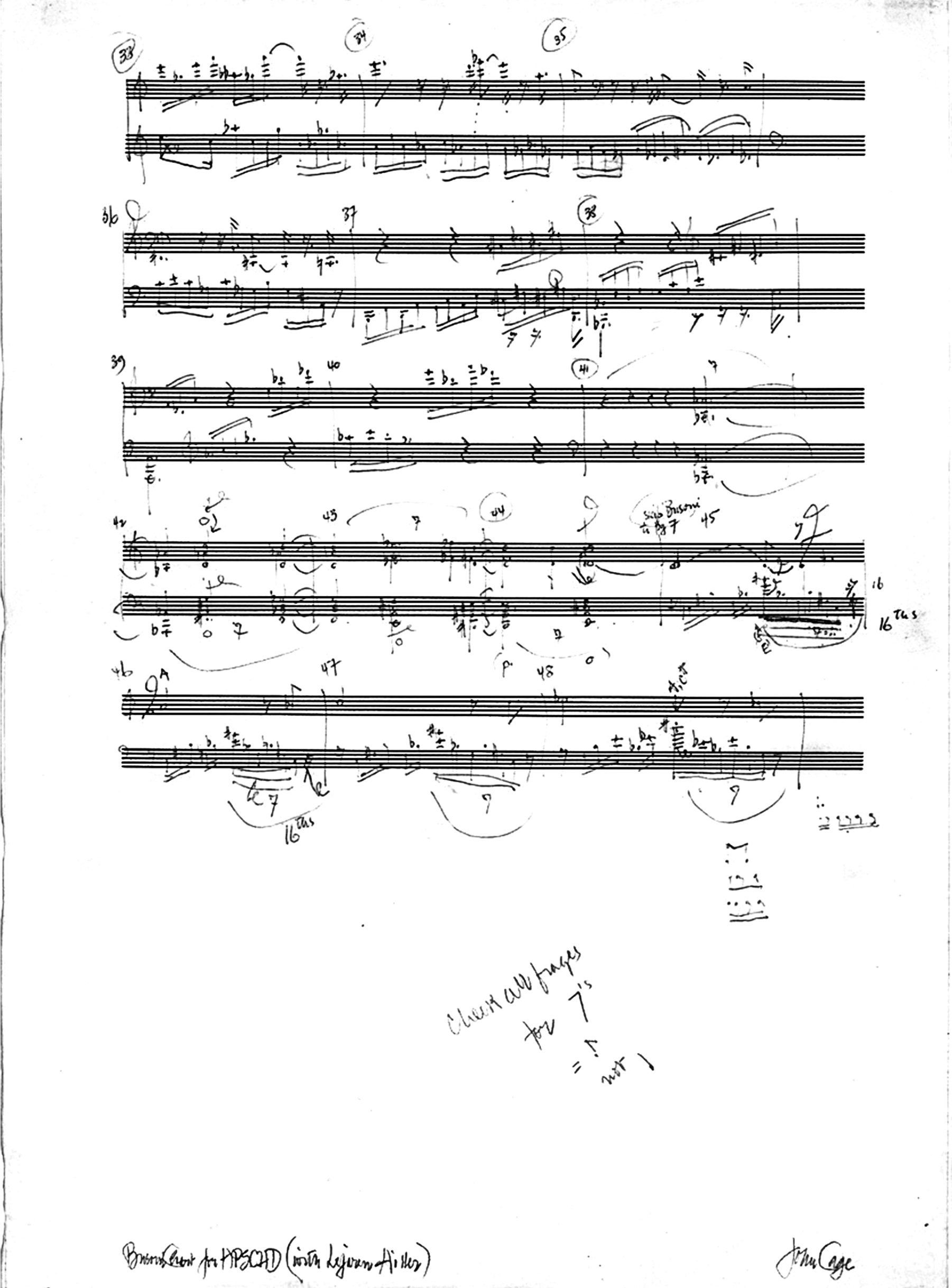 The manuscript signed by John Cage of the first movement of Sonatina No. 2 of Busoni, rewritten in 3/4 to be used in HPSCHD. In addition to the parts made with the computer, the seven parts of harpsichord they should also draw from works already published, among the selected authors also appears Ferruccio Busoni. 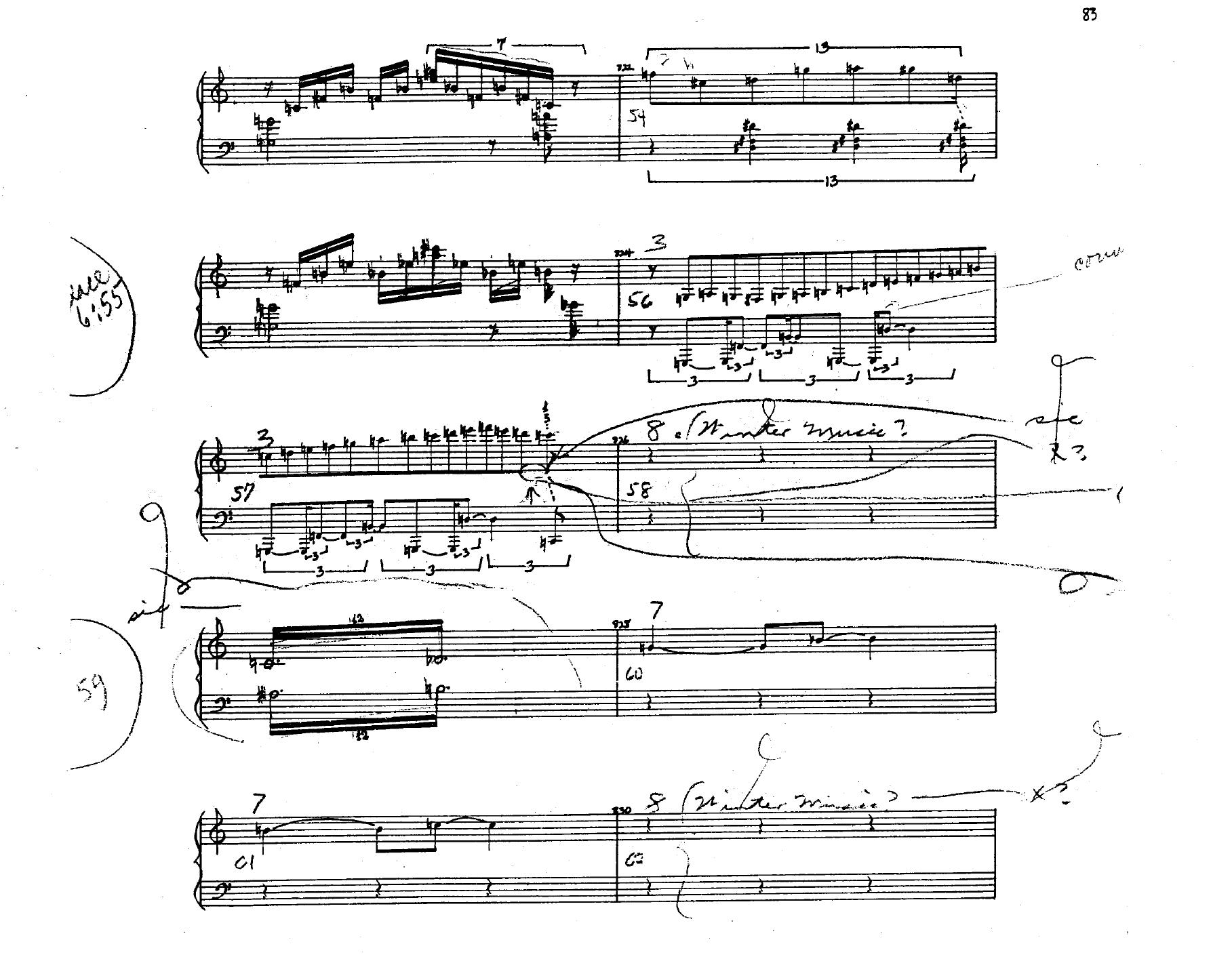 A page of the Solo N°. 5. The second measure is taken by Busoni, in replacement of un’estrapolato by Charles Ives, measuring 5 At some notes of John Cage to resolve the issue of the notes that go beyond the scope of the instrument. John Cage Collection, New York Public Library, New York. 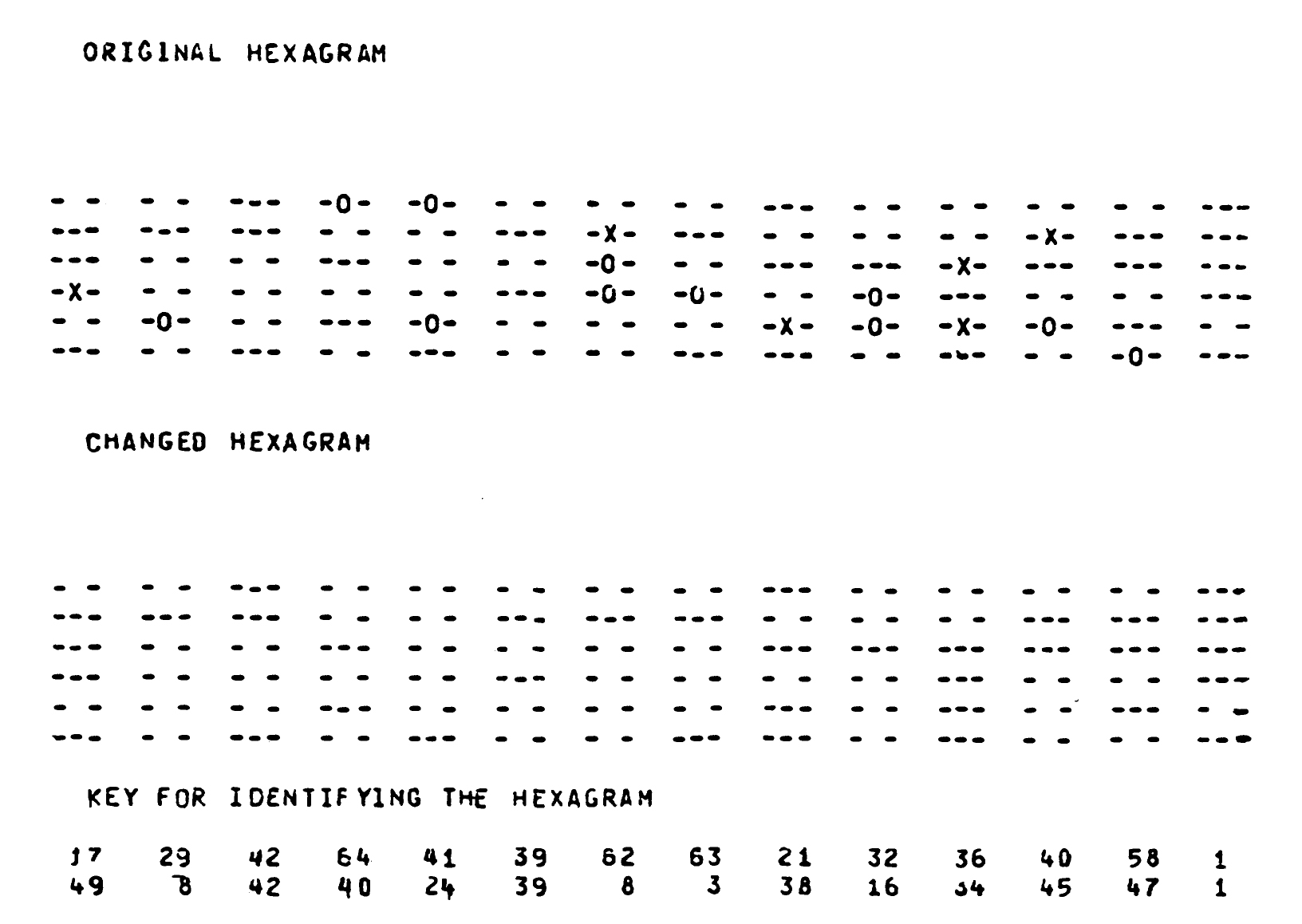 Hexagrams obtained with the routine DiceGame. An important part of the project involved the application of random techniques through the imposition of the I-Ching with your computer. To do this Hiller Cage and they prepared a software called DiceGame, of which the picture shows a printed result. 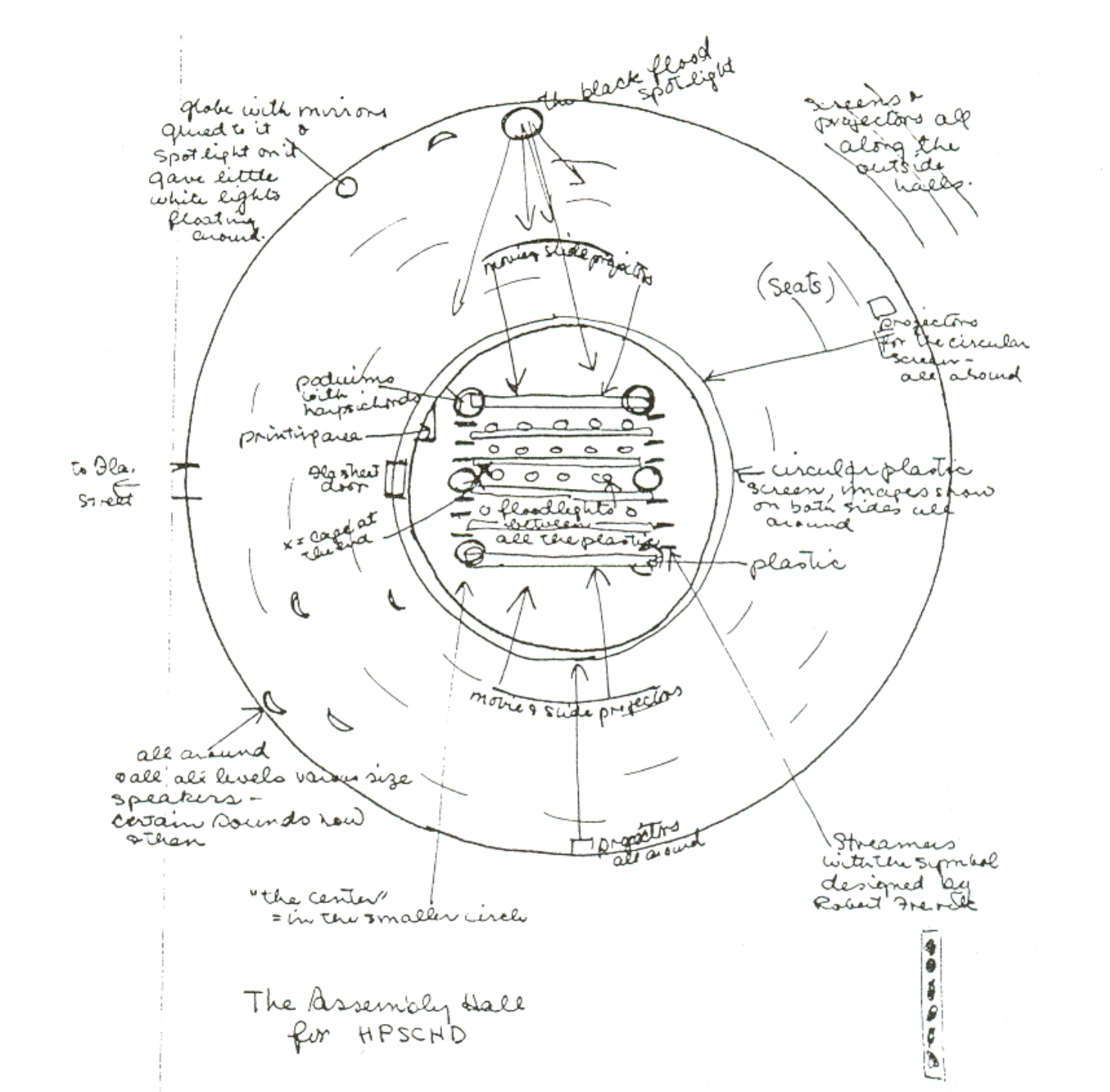 Besides being very complex in terms of musical composition, HPSCHD it appeared very well articulated in terms of presentation and live performance; it is a performance video sections were provided and visual graphics in general. The image shows the mnemonic reconstruction of a participant is represented in the Assembly Hall on the evening of the first performance in 1969 and the way in which I was willing different elements. 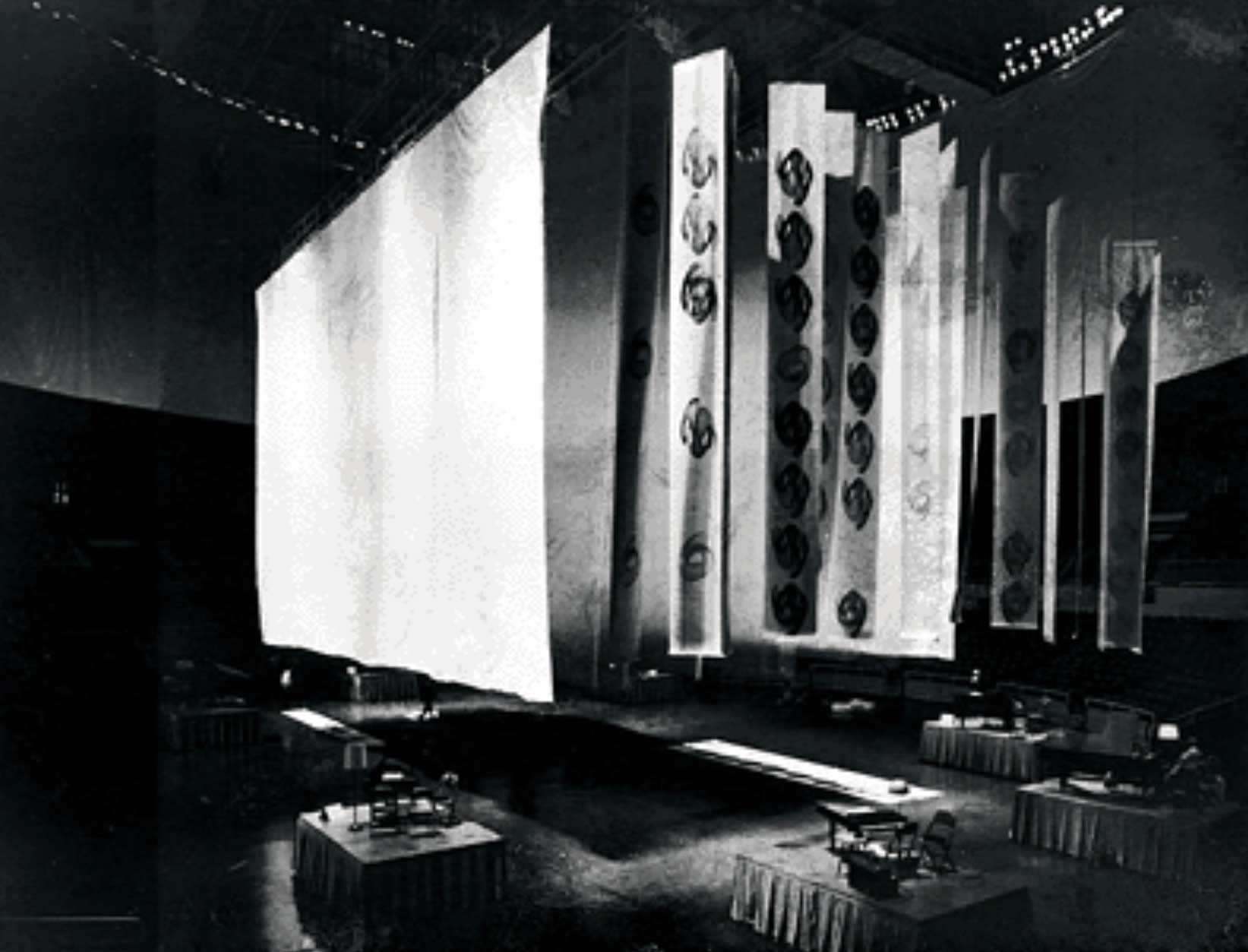 The visual part of the performance occupied a prominent role in the realization of the work, which is why many people were involved, some of which names of absolute respect in the context of the art graphics. In the picture above one of the outfitting dell’Assemlby Hall before the performance. Note the many graphic banners hanging from the ceiling. 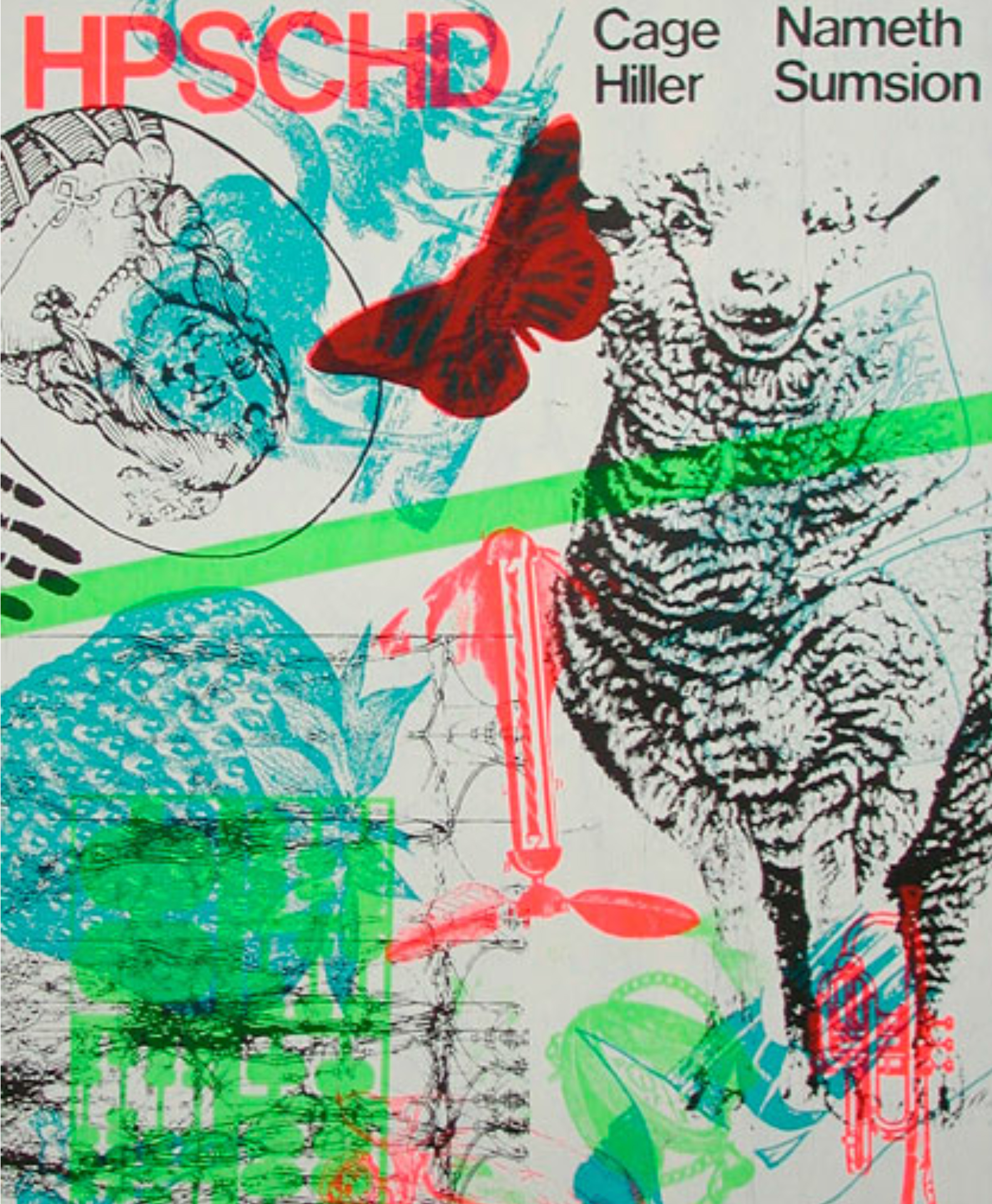 The work on the graphical parts was entrusted mainly to Calvin Sumsion, which in turn took charge of commissioning work to other members of the art graphics. Sumsion made use of the same random techniques taken from John Cage to determine the position and sequences of photographs taken from two encyclopedias, and projected onto sheets of plastic. Probably also the poster shown here was obtained using the same techniques random. Via John Bewley 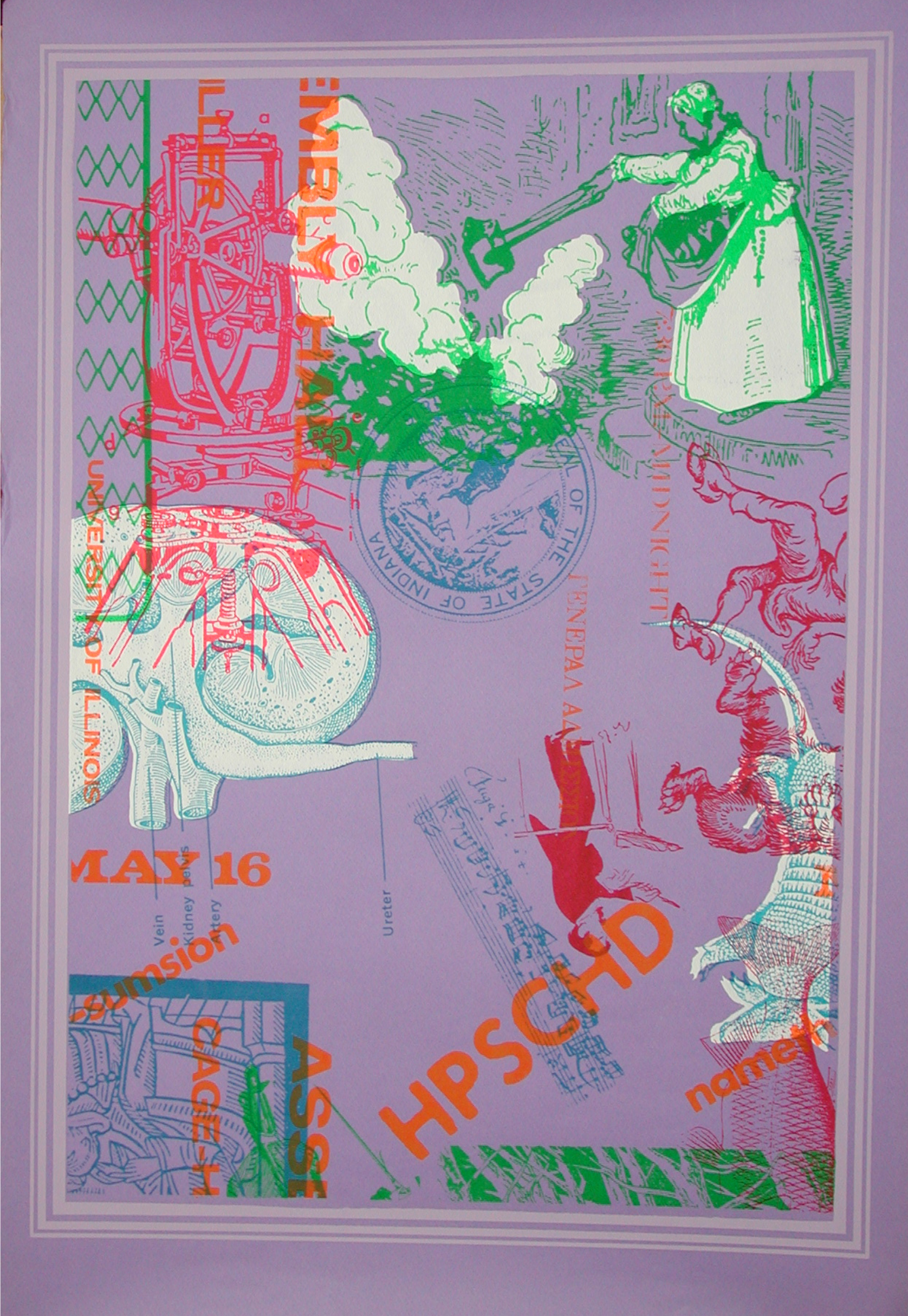 Even this image shows a poster made by Calvin Sumsion, adopting the same methodology of the previous posters, ie using data obtained with the software DiceGame. Via John Bewley 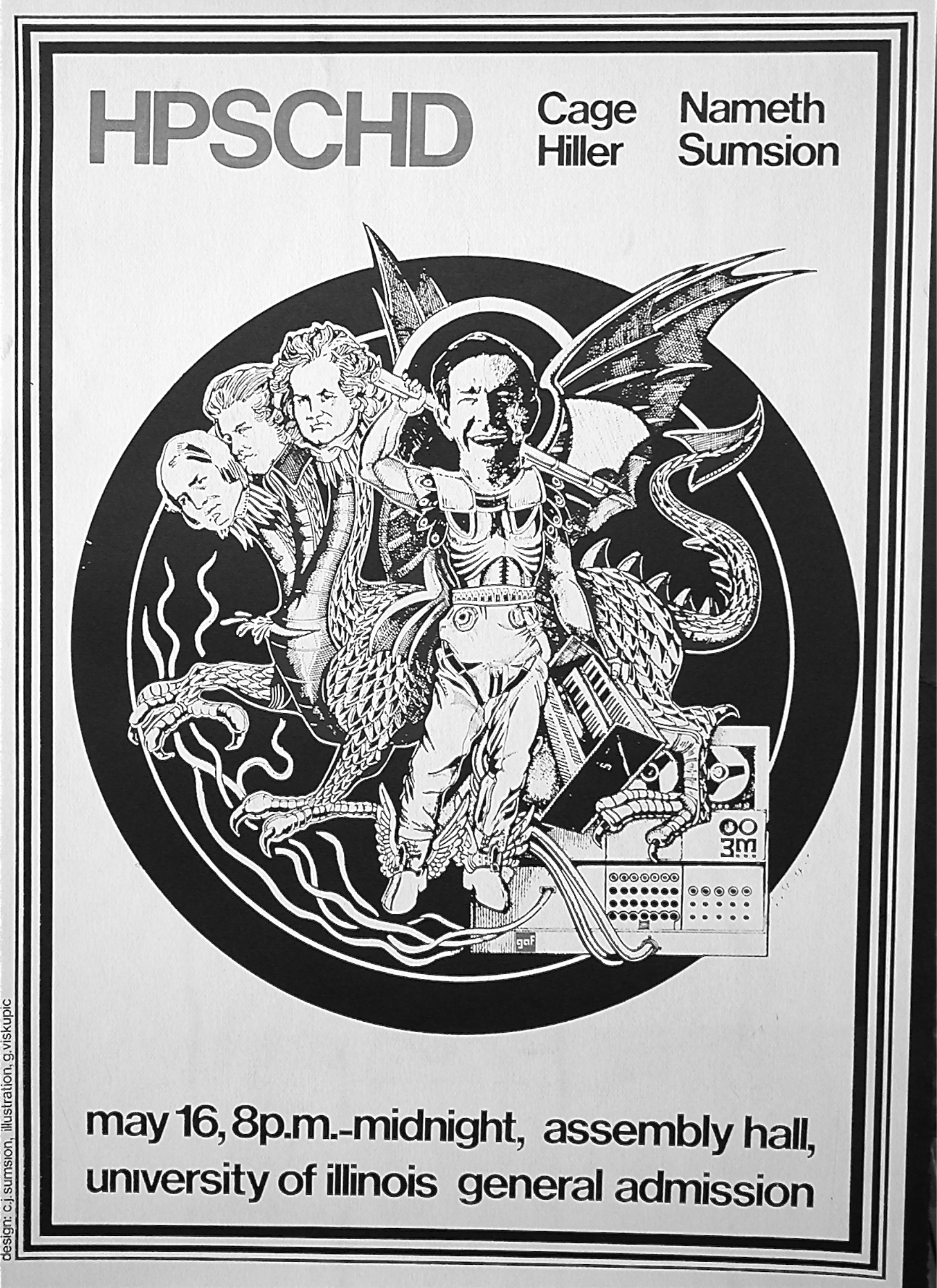 Calvin Sumsion not only had the task of creating graphics work but was also responsible for commissions directed to other professionals. Among the selected names there were Ronald Resch who was asked to prepare a series of armonografie, and Gary Viskupic who was asked to make a poster that raffigurasse John Cage forward to a dragon with three heads: that of Bach, Beethoven and Schumann. The graphics obtained was used for the poster presentation of the premiere at the University of Illinois, May 16, 1969. Via University at Buffalo The Music Library 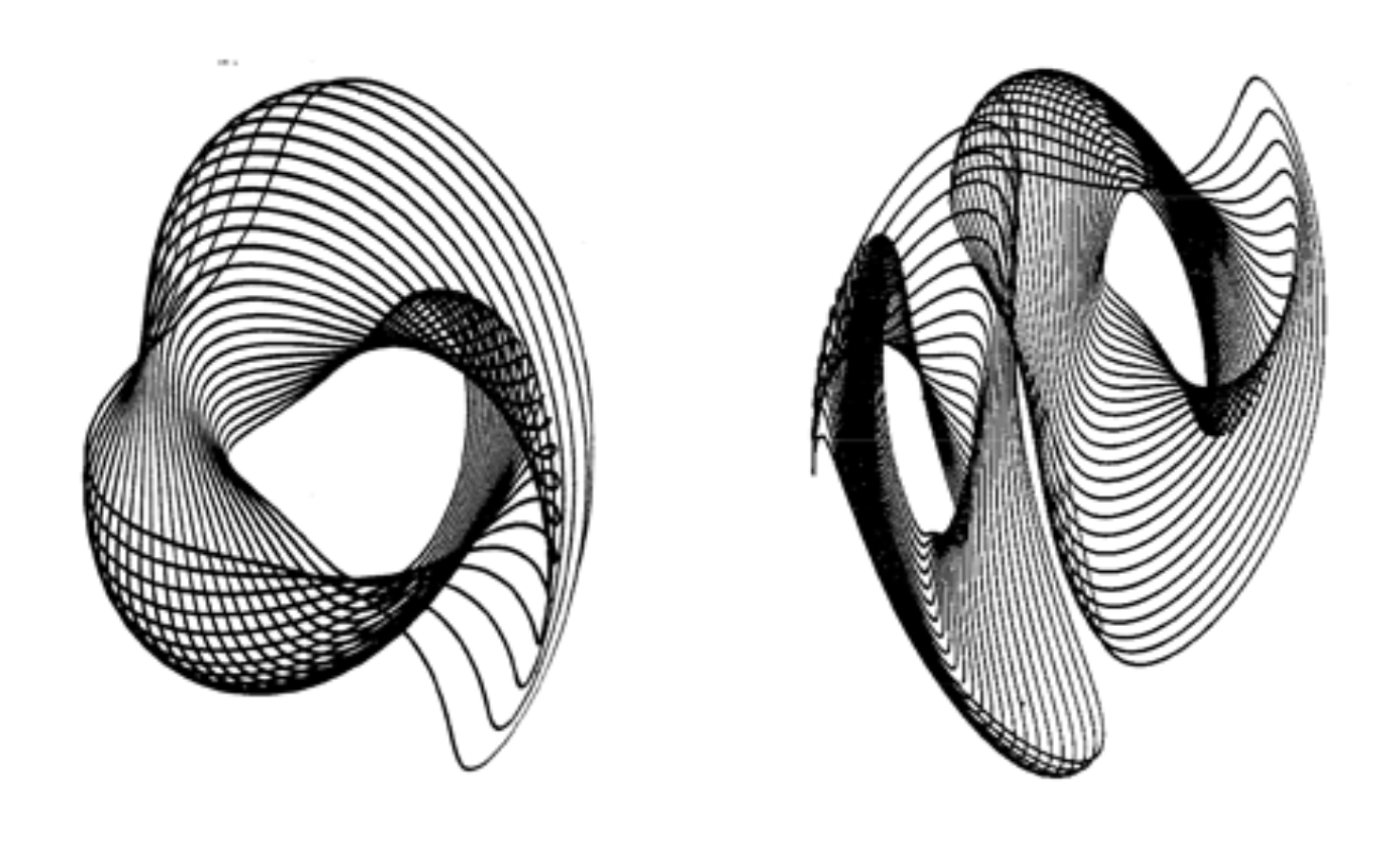 Two of the many Harmonographs made by Ronald Resch. 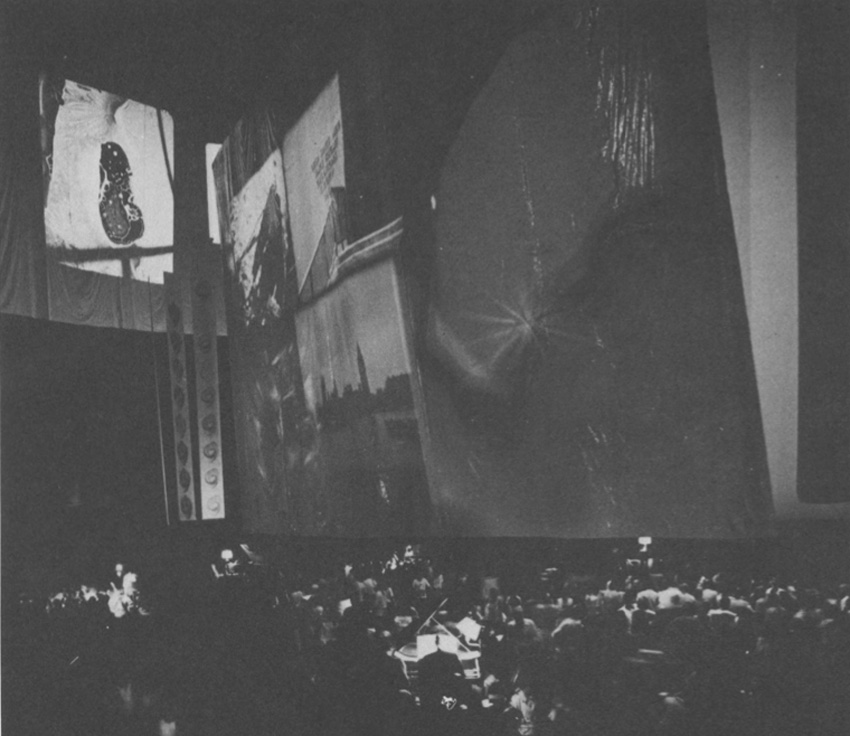 A photograph taken in the evening of the first performance in the Assembly Hall of the University of Illinois, May 16, 1969. 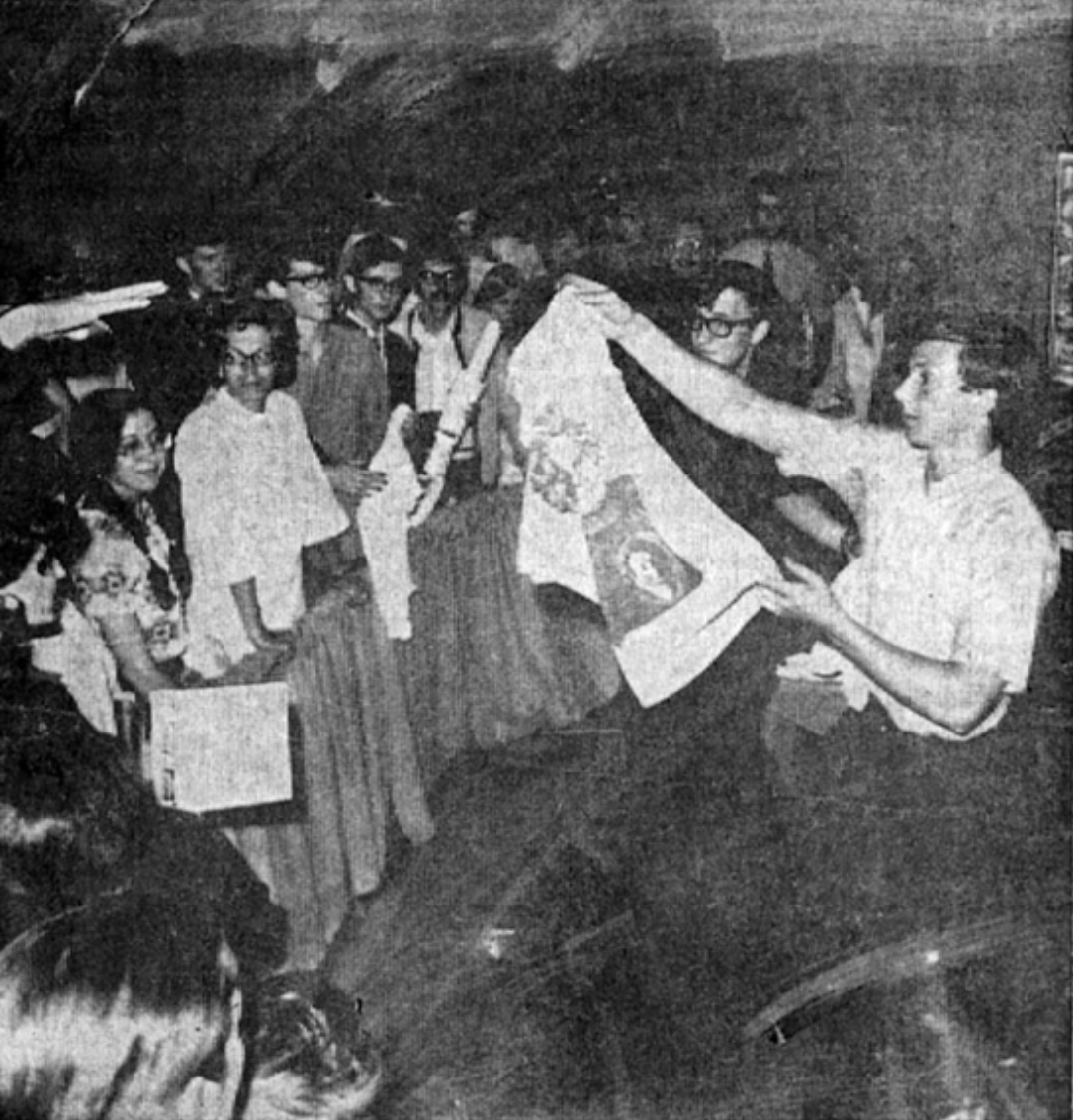 On the evening of the first performance is no shortage moments of pure merchandising, with the sale of t-shirts designed by Gary Viskupic depicting Beethoven wearing the sweatshirt of the University of Illinois that bears the face of John Cage.
Via University at Buffalo The Music Library 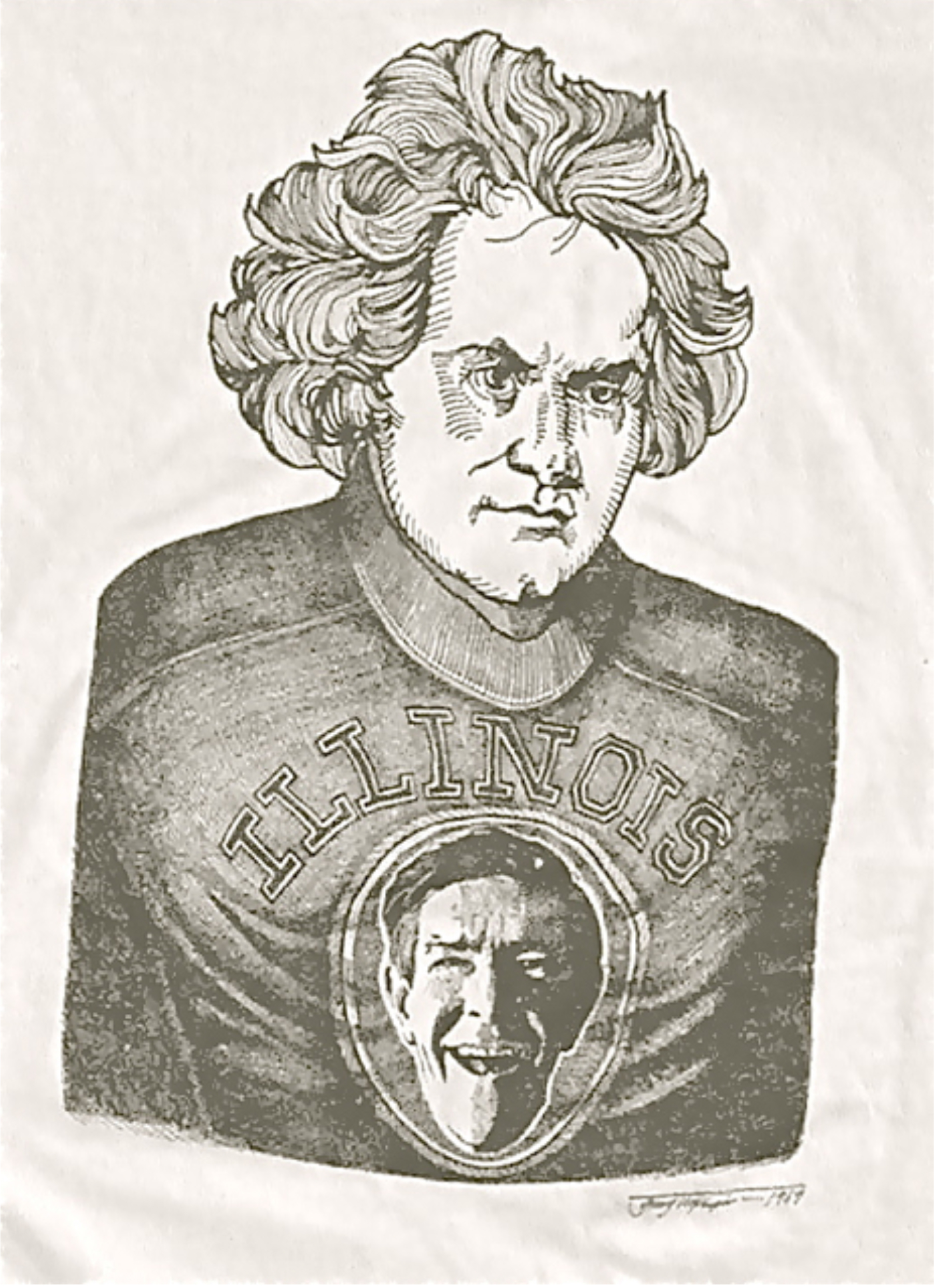 A magnification of the graphics by Gary Biskupic for t-shirts on sale on the evening of the first of HPSCHD. Via University at Buffalo The Music Library 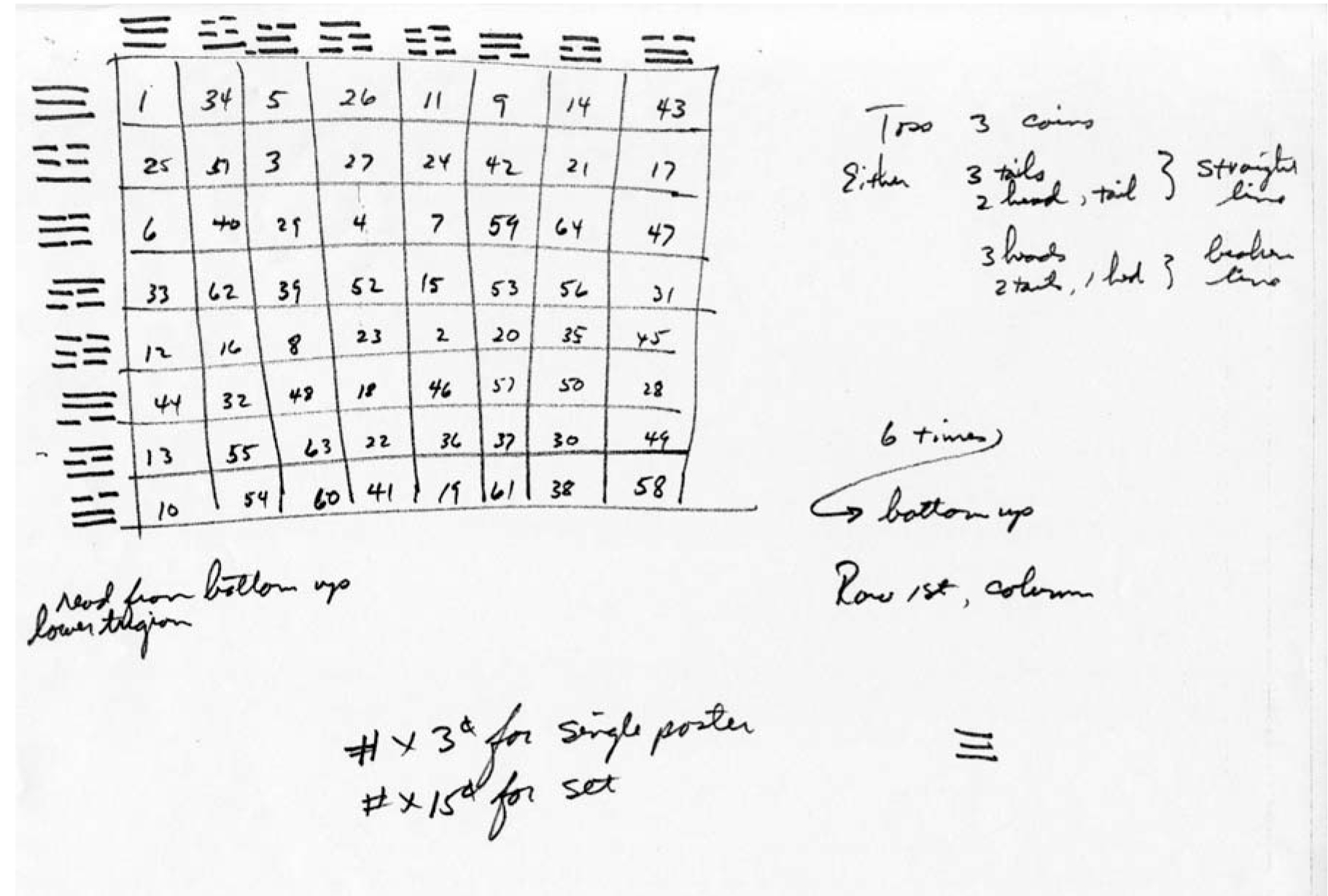 Even the merchandising business was affected by random methods of John Cage. The image shows a table to calculate the selling price of the posters, on the basis of the I-ching. 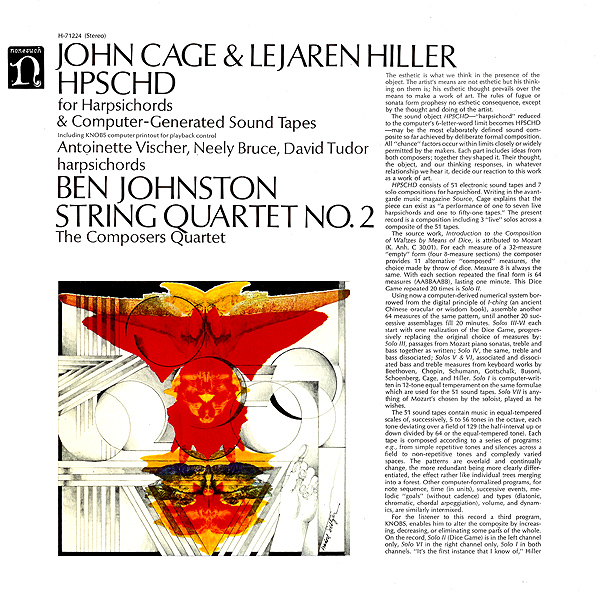 Although HPSCHD looks like a very complex project, designed to be represented and performed live, the Nonesuch Records also wanted to make it an issue in the study. The special feature: the listener was instructed on how to operate the knobs for volume on the two stereo channels, for an experience not to passive listening, but for participation, as it was in the spirit of the performance. 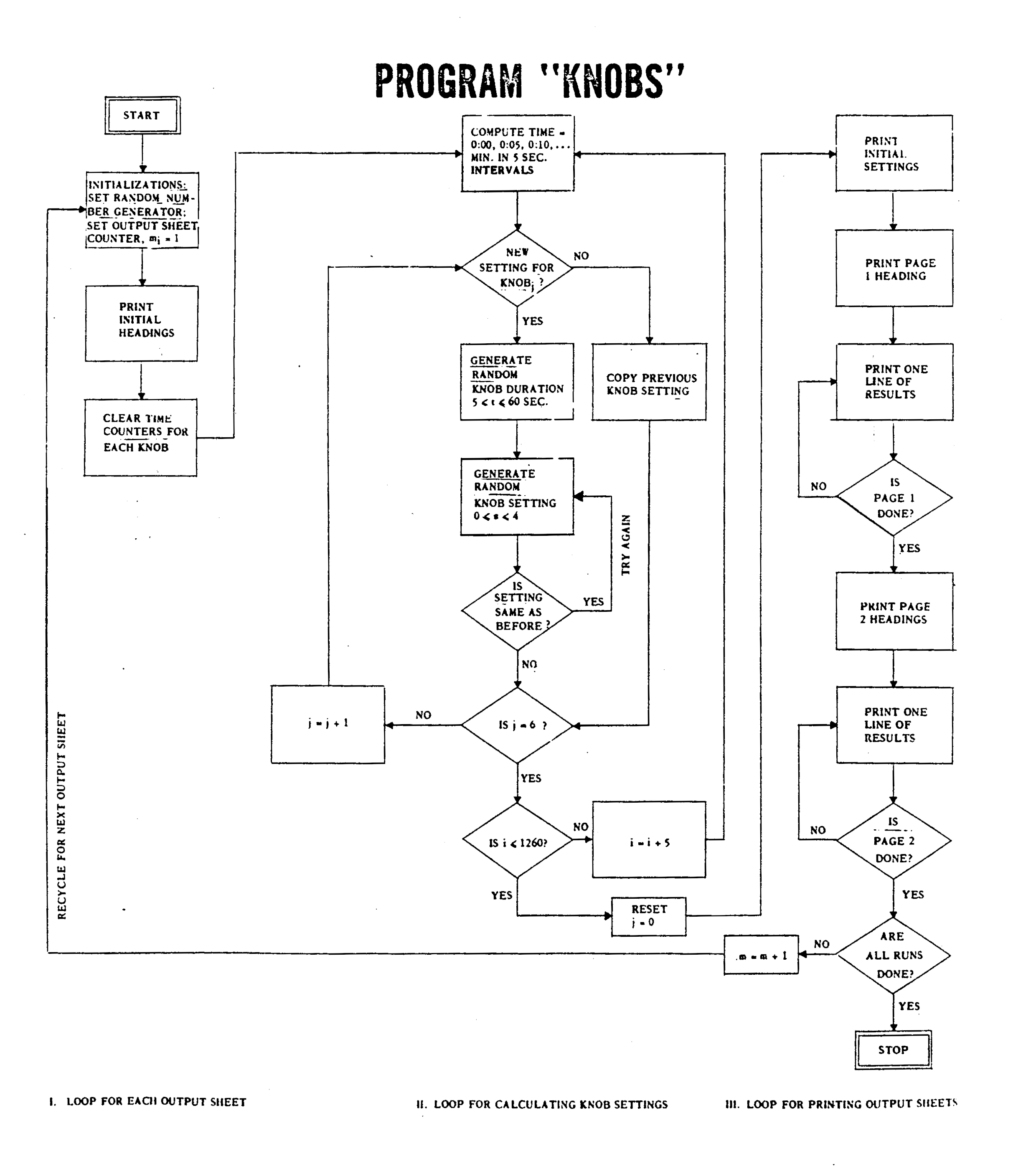 For the user to be able to act on the volumes of the stereo channels, was developed a dedicated software, called KNOBS, of which the picture shows the alrgoritmo. 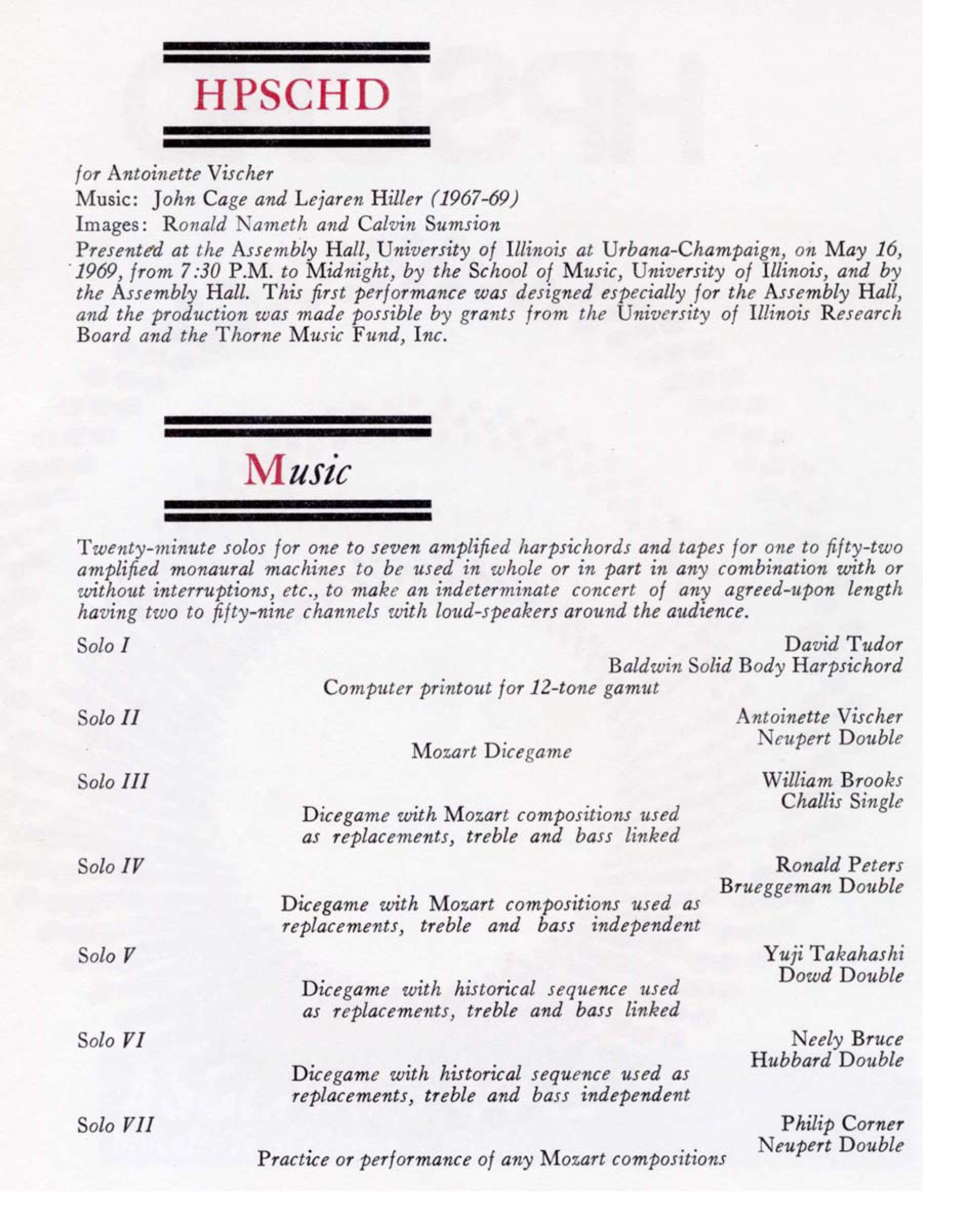 The image above, including the one below, showing the program notes of the first performance in 1969. However, we must remember that other executions, albeit with some modifications, were organized in the course of that year and the following years, until you get to rather recent years. Via University at Buffalo The Music Library 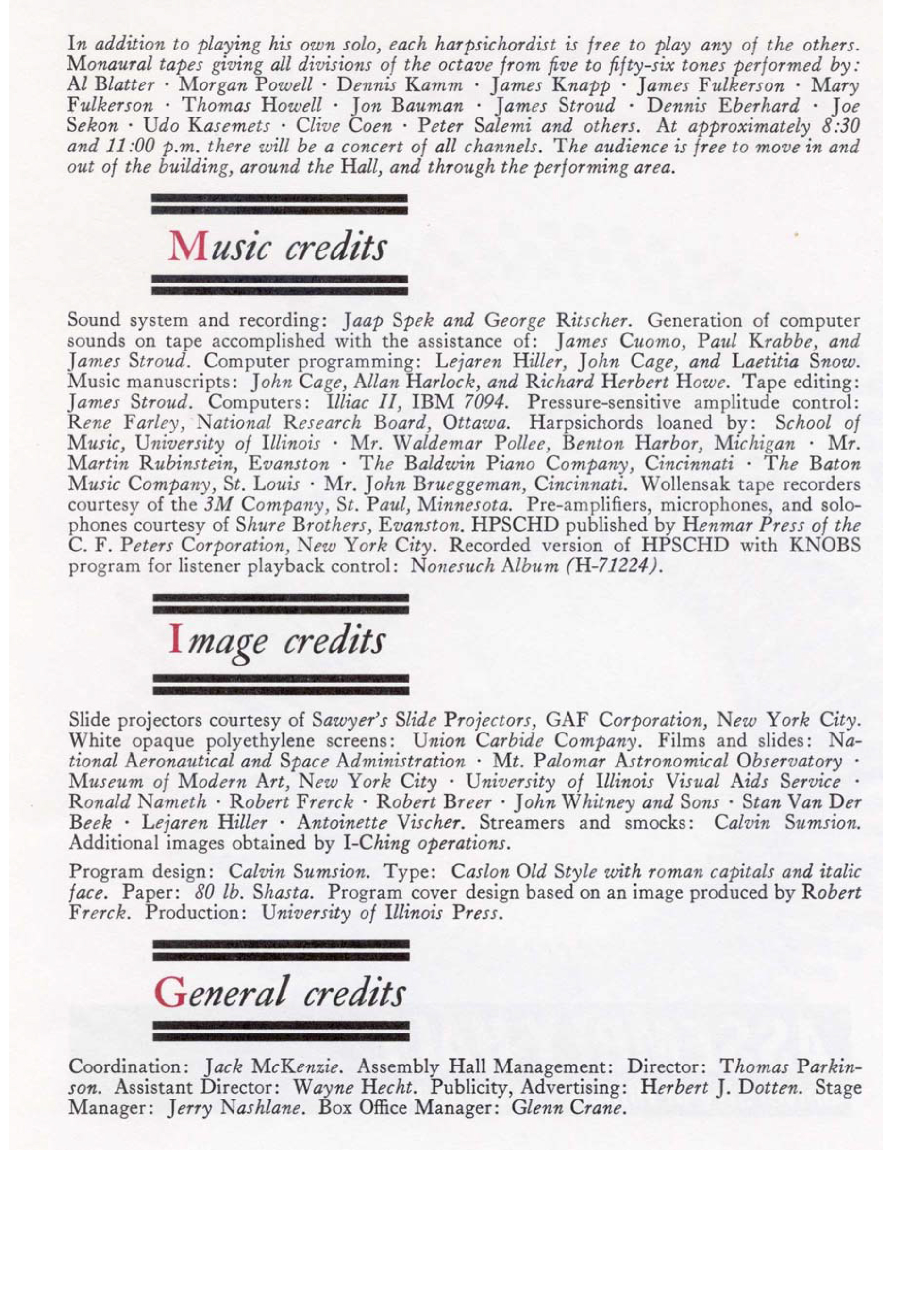 The second page of the program notes of the first performance of HPSCHD, dated May 16, 1969. Via University at Buffalo The Music Library 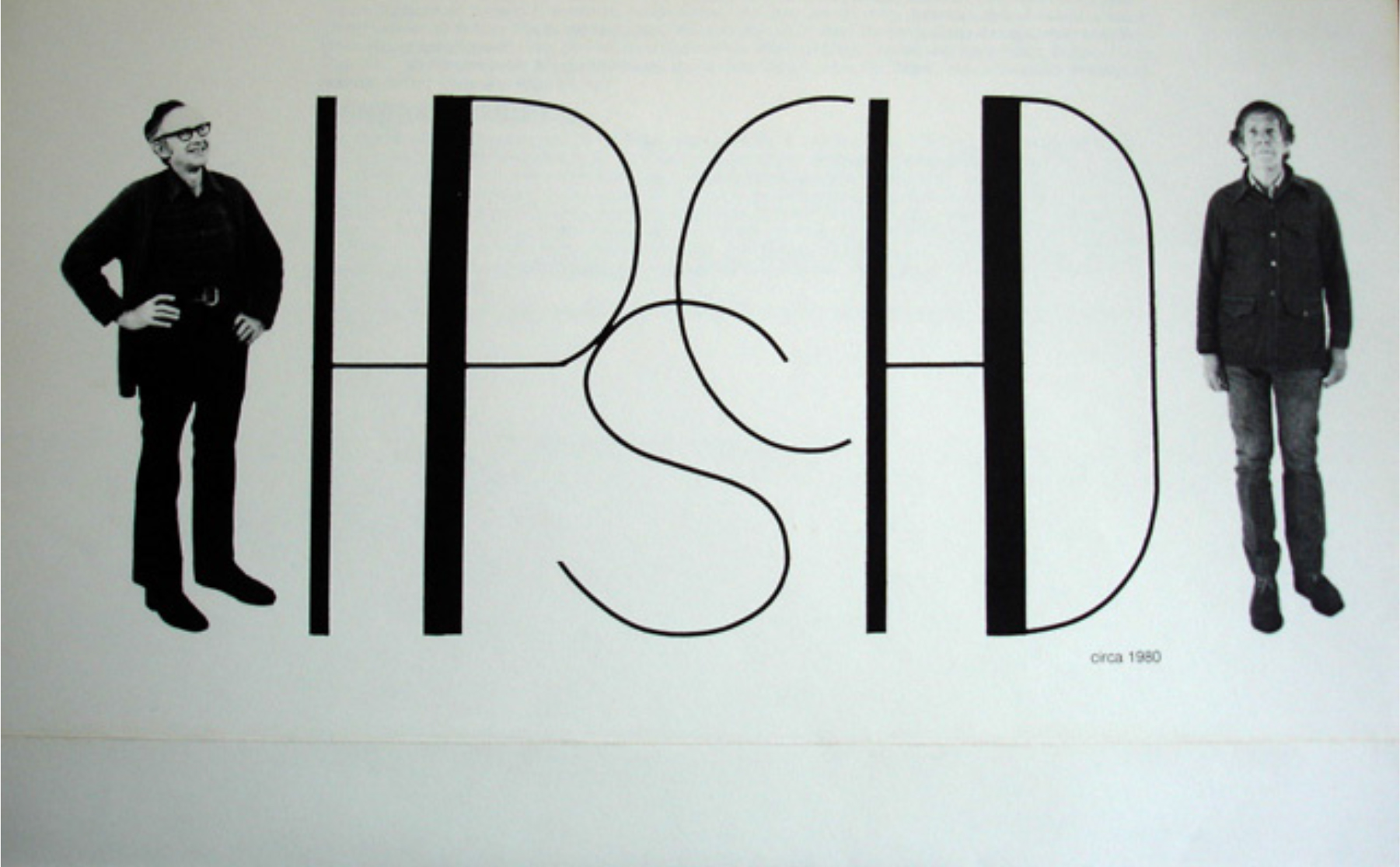 The poster for the evening at the Albright-Knox Art Gallery in Buffalo, New York 1980. In truth it is not always clear which execution refer the poster in question and the program of the next photo. Via University at Buffalo The Music Library 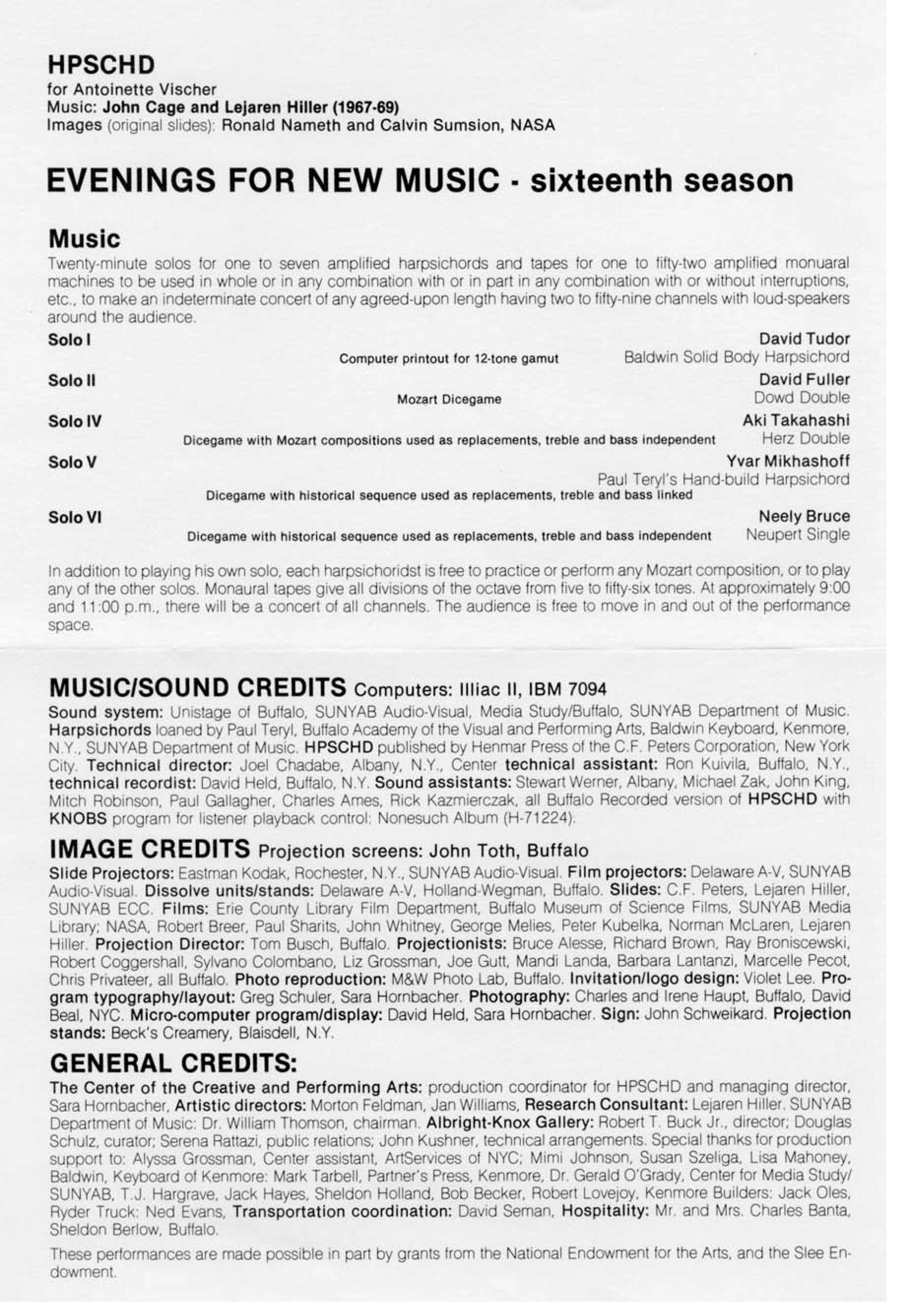 The theater program performance at Albright-Knox Art Gallery in Buffalo, New York 1980. Via University at Buffalo The Music Library 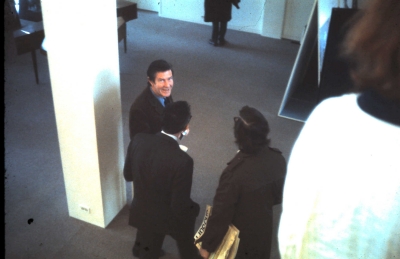 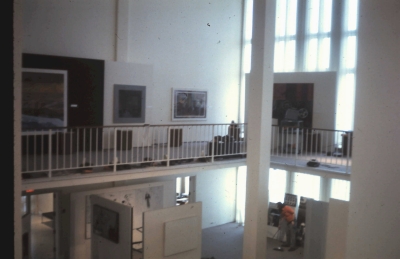 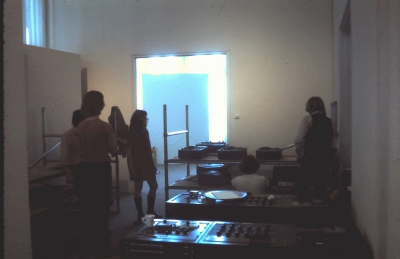 To delve into the history of HPSCHD, refer you to the full article you can find by clicking this link.

One thought on “Photostory #4: HPSCHD”