The 4x is the last digital signal processor designed by the Italian physicist Giuseppe Di Giugno and developed at Ircam. The 4X processor is a single element of a more complex system for computer music named simply 4X System.

Brief History – As the previous devices, even the 4X was a part of a more complex system named 4X System or 4X synthesizer. The 4X was the results of many years of improvement research and so this machine was very powerful and for this appreciated by composers. His importance is demonstrated by the many musical works composed with this device, by the many composers who used it and, finally, by the commercialization phase started in 1984 selling the royalties to Sogitech. 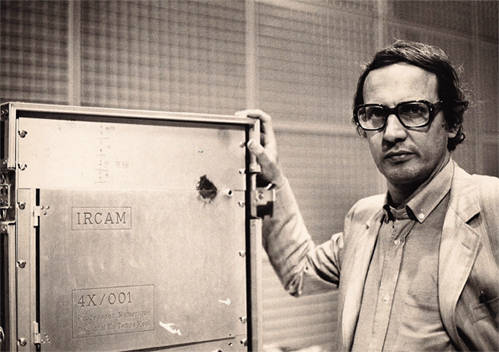 The 4X System – The 4X System configuration was based on a PDP-11/55 computer. The 4X processor, furthermore, was articulated in eight elementary units, i.e. eight processor, each programmable separately and named 4U (in some book, I have read about the 4U as a processor following the 4C but preceding the 4X, but in general this information seems to be wrong). The 4X system was equipped even with two boards: one for controls and another for the interface.[1] Even 16 output DAC and 16 input ADC were part of the 4X System, so the synthesizer could be used for many operations in real time: musical performances, sound processing, digital record, sound synthesis and analysis as Linear Predictive Coding (LPC). The first version of the 4X was completed in 1981 after a very long time for design and revise the digital processor. The presentation took place at the International Computer Music Conference, moreover the 4X was utilized for a first version of Pierre Boulez’s Répons.[2] 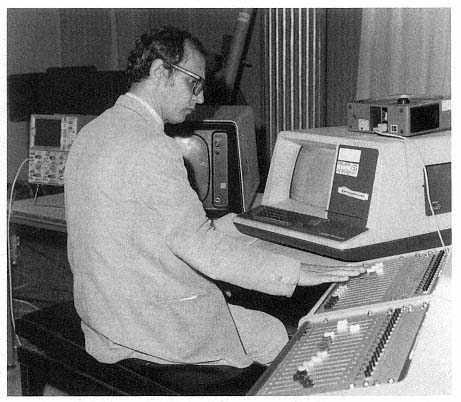 The 1984 version – After three years, a new 4X version was developed, in the same year of his commercialization through the Sogitec. The main differences among the two versions concerned some features of the 4U, of the system control and some problems concern the implementation of the Motorola 68000 processor.[1] Since the new 4X had more sophisticated features, it was used for the new version of Répons by Pierre Boulez, which needed a digital instrument more powerful, so capable of doing sound transformations in real time six time more hard than those realized in the 1981 version.[1] The 1984 version appeared so structured: 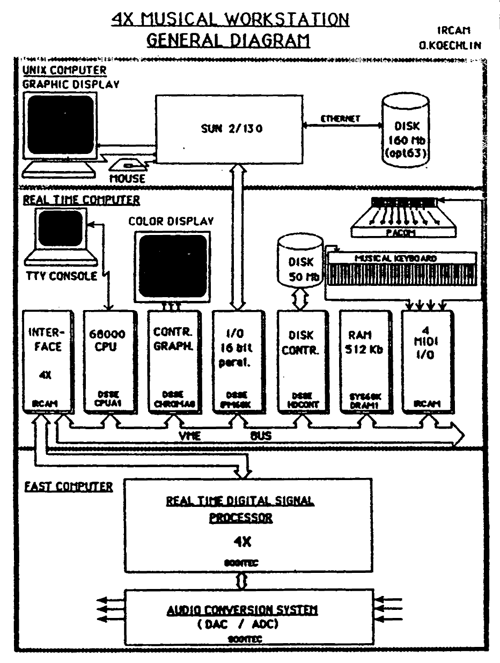 Synchronization Problems – The 4X project born in a cultural and technological context very different if compared with that of the 4A. In particular, those most interested in these projects, the composers, dreamed a computer that you could define a musical instrument. For this, was necessary a very powerful machine, even to respond to the new challenges posed by research. Among these, it is worth remembering the problem of synchronization between the performer and the computer during a live performance.

Score following – In fact, after having realized a machine capable of working in real time, was necessary connect the performer of traditional instrument with a computer performer. Among those interested on this topic we remember Miller Puckette, who said that the first interesting results were achieved by Barry Vercoe and Larry Beauregard with the Synthetic Performer, a system with which the 4X processor was implemented in 1984.[3]

1985: MAX/MSP – In 1985 Barry Vercoe called Miller Puckette to moving at Ircam, for a collaboration in a new IT project named Synthetic Performer. So the U.S. mathematician knew the 4X processor. After a little time, Puckette decided to implement his Music 500 software for the digital processor by Giuseppe Di Giugno. This project wasn’t possible, due to some technological problems, but Puckette wanted use at least the control part with the 4X. The new software was named simply Max/Msp.

1988 – In 1988 the 4X was set in a new configuration. In fact, extrapolated from the more complex system, the 4X was interfaced with a Machintosh computer and adopted as a simply external midi device. Miller Puckette programming the new implementation through the Lightspeed C language (also called THINK C) and utilizing even Max/Msp, which began to establish itself as visual programming language thanks to Patcher.[3]

Dedicated Software – Beyond the first software developed in 1981 by Jean Kott, too much limited for satisfy all the needs of the composers, very interesting was the first software truly dedicated to the 4X: the 4XY music compiler. It was developed by Olivier Koechlin and Robert Rowe, this last has oversaw the implementation.[4] 4XY could be defined as a C extension, useful for design software for the control of the 4X processor. His goal was to simplify the user approach to music composition with a computer. In particular the 4XY was designed to writing music algorithms in a most simple manner, even used in real time. The most important functions of the 4XY was called Actions.[4] The 4XY was realized in 1985, and upgraded in the later years. Being a C extensions, the 4XY could be easily modified.

Max/Msp – Previously we wrote about Max/Msp and how it has found a first interesting application with the digital processor by Giuseppe Di Giugno, contributing so to the next developing stage of software for the 4X. Some tried to interface Max/Msp with the 4XY but among them there was a fundamental incompatibility. Afterwards, this became a parallel research activity.[1]

Potacsek – The researcher Patrick Potacsek worked to developing a GUI for a simplified management of the 4X, so the users could use the processor through a mouse in a graphical environment made by raster graphics. This GUI allowed user to link modules with an approach not much different by those adopted today, as we seen in the picture. Icons moved above the screen, could be linked together by drawing lines.[1]

PACOM – As much interesting, as the GUI by Patrick Potacsek, is an external panel named Pacom that assembled some controllers for the 4X. These allowed musician to use the 4X as a real musical instrument. 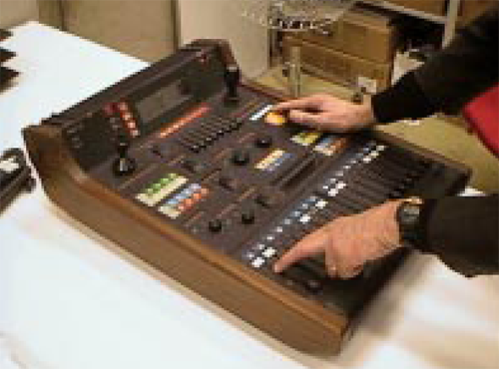 5A – Miller Puckette remember that in those years researchers thought to design a floating-point processor, capable of high performance. This could be called 5A, but it was an idea, and only a prototype was realized. However even Di Giugno spoke about this new device in 1983, after selling the 4X royalties to the Sogitec.[3] He affirmed that the 24-bit technology of the 4X processor was too much limited for realize music in real time with a computer, in particular users could feel the major limits during the analysis-resynthesis phase.[5] But is also true that the 5A project was prevented by the new personal computer commercialized by the nineties. These were fast, small and cheap. And so the global research system inside the big musical centers was thrown into crisis.

Limits – But Miller Puckette declared that the main problems of the all 4N processors were not their presumed technological limits, but the lack of dedicated software; which allowed only to expert users the use of the 4N processors. Even Curtis Roads has noticed that the 4X was available only to musicians with computer skill, due to the lack of software useful for a 4X user friendly managing.

Paris/Padua – However, we can remember that the 4X was not adopted only by composers or musician but it was available even for researchers, so that the Ircam in 1985, thanks to collaboration agreements, given the 4X to the Centro di Sonologia Computazionale, Padua. Here, the 4X wasn’t never used, due to technical problems, but it was used as a model for the 4i, a light version of the 4X designed again by Giuseppe Di Giugno. The 4i was then integrated in a more complex system named Sistema 4i.

Musical Works – Beyond technical questions, the 4X System had great success among musician and composers, for this was used for many musical compositions, even with interesting aesthetic qualities. Pierre Boulez has been very interested to the 4X processor, and it used this machine for his Répons, because the success of this digital instrument could justify, on international stage, the large investments of the Ircam. In addition to Pierre Boulez, we remember also Epigenesis (1986) by Jean-Baptiste Barrière, Halls of Mirrors (1986) by Robert Rowe e Growing Elements, You Name It! (1986) by Bobby Few. Again: Jupiter (1986/87) by Philippe Manoury, Aloni (1986/87) by Thierry Lancino, Antara (1986/87) by George Benjamin and Aér (1986/87) by Fançois Bayle.