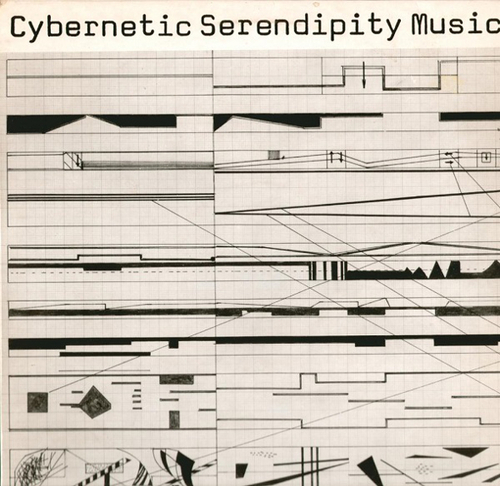 Cybernetic Serendipity is considered a real cult event among those interested in the use of technology in the arts. It is an exhibition on cybernetics art organized in London in 1968 by the Polish curator Jasia Reichardt. Perhaps the first exhibition dedicated to the artistic applications of modern computer technology.

To celebrate the entire event and, at the same time, to give the public a concrete example of what was happening in the music, was produced this LP that collect extracts or whole compositions of experimental music composed with the computer, and more.

Yes, because this collection also brings together excerpts from works composed with traditional instruments, or nearly, but not realized with a computer. Clarifying the reason for their presence in a collection that celebrates an event on cybernetics is undoubtedly the first step. The reason for this editorial choice was to protect the computer music by any process of historicizing, and to emphasizing the idea that a full understanding of this area of contemporary music, forced to cross different experiences, from computer music had drawn or which she herself had nourished.

So, you understand the presence of two extracts from famous works not composed with a computer: the first extract is taken from Cartridge Music (1960) by John Cage, the other to Strategies (1962) by Iannis Xenakis. Both of these works, in their own way, are based on the procedures not alien for the computer technology: for example, game theory employed by Xenakis in Strategies or the random procedures adopted by John Cage in many of his works.

Both of these experiences are summed up, in some ways, in the song that introduces the entire collection, as well as one of the most famous works of computer music from an historical point of view: the Illiac Suite (1956) by Lejaren Hiller, who through imposition of random procedures and the application of extra musical models realizes the score of a work performed with traditional instruments. In this collection is presented only the fourth experiment, corresponding to the fourth movement, but I’ve written another topic on this work, that you can read by clicking on Illiac Suite, so you can listen the all four movements, loaded onto musicainformatica’s You Tube Channel.

Like Lejaren Hiller, even Wilhelm Fucks was a pioneer in the use of computer, but for other reasons. He is here with an experiment titled Experiment Quatro Due (1963), in which the computer was used to realize the score, then performed by a traditional piano. Yet pioneer said. In fact, the German musicologist was one of the first to be interested in the computer as a support tool for music analysis, with some studies on music intervals realized ​​in the sixties. After the track of Fucks, there is Mudgett, Monologues For a Mass Murderer (1965) by James Randall, which I have already written here.

Like the Randall’s track, also the next of Gerald Strang back us on the digital synthesis of sounds, unlike the work of Hiller and Fucks which represent two examples of computer-assisted composition. A pupil of Arnold Schoenberg and Charles Koechlin, Gerald Strang was among the first composers to take an interest in computer music and to take part in one of the first conferences to present the results achieved in that area; an experience from which it was obtained a publication already reviewed here. In this collection Strang is present with Composition 3 (1966), a song that in just 2 minutes shows a quite large example of digital sound solutions.

Very interesting are the next two tracks, not so much for the value of the compositions but rather for the names of those who have composed. The first track, in order of succession, is an excerpt titled Bit Music (1967/68), synthesized entirely with the computer by the Japanese Haruki Tsuchiya. This is probably a man wholly unknown in the music, since it is a systems engineer and programmer, who has been active in particular in computer art, contributing to the foundation of the Computer Technique Group, a group active since the late sixties, which brought together artists and technicians. In his works of graphic art made with the computer, Tsuchiya adopted random procedures used in a manner similar to what was done in music.

Tsuchiya was also a man capable of expressing the potential of computers in the arts with a lucidity still unthinkable for some contemporary artists. Tsuchiya showed that the harshest criticism to the use of this new technology in the arts arrived, ironically, by those without any familiarity with digital technology. Also believed that the exploration of the potential of the computer should not be a task of the technicians or engineers, but a task of artists, or that people who are able to rely on both skills.

Artists who were not computer professionals were extremely suspicious of computer art. Haruki Tsuchiya

The track that follows that of Tsuchiya is Enneadic Selections by Thomas Hay O’Beirne, another man as interesting as unknown to most people. O’Beirne is a Scottish mathematician who during the sixties began to be interested in non-scientific computer applications, like the music. In 1965, on the occasion of a public meeting, O’Beirne was able to come up with an intervention focused on music, numbers and computer. In the following years he conducted further experiments in computer music with a computer Solidac, by developing a software called Orpheus, which probably was also used for this Enneadic Selections (1968). It is a song featured with dated timbrical solutions, but O’Beirne tried a curious synthetic reproduction of sounds of bagpipes, as you can hear from 3:32, perhaps a tribute to his native land.

Close the collection two people who have devoted a large part of their career to the computer experimentation in music. The first of these is Peter Zinovieff, which in England was among the first to buy a computer for his private studio. Her name is linked to the Electronic Music Studios who developed the Synthi 100 and the Computer Synthi, thus integrating the computer technology in the analog electronic music studio. January Tension (1968) is a track in which the PDP-8 computer was used for both the composition and execution.

The last piece in the collection is Infraudibles (1968) by Herbert Brün. It is a work reazlied at the University of Illinois; specifically the sounds were made ​​with a computer Illiac II, while the score with an IBM 7094 and a program developed in Fortran. There are two versions of this work carried out in the same year: the first is only for two-channel tape. The second version, which corresponds to that contained in this collection, is for two-channel tape and harpsichord, double bass, electric guitar, french horn and saxophone.

Cybernetic Serendipity Music is not just a collection of electronic music, but a real historical document that shows some trends of contemporary music in the late sixties and offers an overview of some of the peoples who have contributed, each in a different way, to the experimental music through the computer.