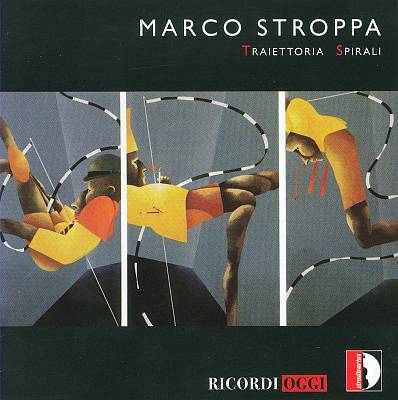 Marco Stroppa is an important name in contemporary Italian music; although I think it’s most known and appreciated abroad than in Italy; a consideration that seems to be confirmed in the long list of appointments and collaborations conducted outside the Italian borders.
Marco Stroppa, I would add, it can almost be considered a digital native (to be clear it is not), representative of the first generation of composers who have approached computer technology at the time of their training, therefore, distinct from those who have known the possibilities offered from digital in full artistic maturity, as in the case of Luigi Nono; to cite one authoritative example, just to stay in Italy.

This Cd published by Ricordi and Stradivarius collects some works composed by Marco Stroppa in the early years of his career, in which he makes use of the computer: the cycle Traiettoria, composed between 1982 and 1984, and Spirali, dated 1987/88. Among the two works is placed only Pulsazioni, 1987, but not in this collection.

1982. Marco Stroppa at just 23 years old he began work on his cycle Traiettoria, which includes three works for piano and electronics: Traiettoria… deviata (1982), Dialoghi (1983) and Contrasti (1984). Initially conceived as a short composition for solo piano, soon the whole cycle was predisposed to accept the fruits of the experience that Stroppa was living with the computer music at the Center of Computational Sonology (CSC) of Padua, which he attended from 1980 to 1984 .

The opening track of the entire cycle is Traiettoria… deviata, conceived in Verona – where Stroppa attended the local conservatory before Milan and Venice – but realized at CSC in Padua. Of the three parts, the first is that I believe characterizes less the Traiettoria cycle, in the sense that there are already some peculiarities of the entire work (a very percussive and energetic writing), but at a level of development still contained, controlled, which lacks the tension and intensity that we find in the next two parts. Even the game of the parts, including electronic and piano, is much more rigid, less intriguing and less appealing are the timbral solutions of this game that takes place in a more schematic.

Of a different character Dialoghi,  in which the energy of the piano writing emerges with great force; and the parts seem to really talk to each other, leaving the structural rigidity of the previous work and being involved in each other in a long sound game. Very nice the ending, given a slight electronic intervention, with the piano that retrieves the atmosphere of the early bars, closing in on itself. Reveals a great deal of attention in the dosage of tensions, with a soft fall that closes, at 5:01, a progressive accumulation of energy.

Unlike the previous parts, the opening of Contrasti  is entrusted to the electronics, which seems to do a job of imitating the piano, proposing that nervous, percussive and fast writing that seems a stylistic feature of the entire cycle. The piano, in turn, further develops the percussive and vigorous writing, with a very long action in which the hammers beating fast on the strings, returning the timbral effects in some cases very impressive, for intensity, violence, power and beauty. Particularly interesting is the electronic part that you listen from 19:10: great sound masses that turn into circular and percussive sounds that convey a strong sense of movement.

The movement is the key element of the work that closes this CD, Spirali (1987/88). Stroppa writes in the booklet: “Try and imagine a string quartet in a very small room, with the instruments positioned in the four corners: there is no more room for the audience. Imagine also, however, that the audience can shrink itself to become a small dot exactly in the middle of the quartet, and that the four instrumentalists paly various musical objects in succession: even if the musician stay seated, one’s impression will be that these objects are moving.“. I believe that the words of the composer are sufficient to express the sense of this work, in which the technological tool is not used for the synthesis of sounds, but to process, in real time, the sound material obtained from the execution of the Arditti String Quartet, doing literally turn their execution just wrapping in a spiral. The element of spatialization, while important, is not the only peculiarity of this work, very interesting and refined, in which Stroppa also get some beautiful timbre solutions. Remains for me only the question of the effective performance of this CD edition. Having never had the pleasure of listening to a live version, I wonder how much is lost in stereo reduction compared to the original. In this sense, any comments will be greatly appreciated.

I would like to close with technical notes, pointing out that all the work presented here were carried out with equipment and software of the CSC, specifically the Music V and the Interactive Computer Music System (ICMS).