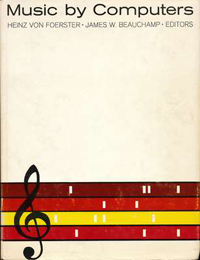 In 1966, during the Fall Joint Computer Conference, held in San Francisco, Heinz von Foerster decided to devote part of the conference to new musical applications of computers.

This book, in fact, is a speaker’s lectures collection. The first computer music conference (International Computer Music Conference – ICMC) was held in 1974; for this can be argued that the conference in San Francisco is among the first official recognition, by the scientific community, of the existence of a new field of computer application, in this case of an artistic nature. This particular occasion also affects the contents, rather diversified in terms of themes. It deals with questions of aesthetics as well as its more technical, related to programming. The book is divided into three parts: programs and systems (I), algorithms in composition (II) and aesthetics of computer music (III). The lectures are by some of the early protagonists of computer music, as specified below:

David Freedman, On-line Generation of Sound – It set out the technical and construction features that should ensure to a machine dedicated to computer music.

James Beauchamp, A Computer System for Time-Variant Harmonic Analysis and Synthesis of Musical Tones – Beauchamp presents the research conducted at the University of Illinois focusing, in particular, on the implementation of a system dedicated to the analysis of the sound materials.

Arthur Roberts, Some New Developments in Computer-generated Music – Roberts presents some innovations in its software Music IVF, belonging to the Music N family.

Lejaren Hiller, Some Compositional Techniques Involving the Use of Computers – Hiller, in his speech outlining the results achieved in the assisted composition after the first experiment of Illiac Suite. Specifically, in the context of this book, Hiller analyzes the characteristics of Algorithms I and Algorithms II. His speech also becomes an opportunity to describe the characteristics of Musicomp: a software developed at the University of Illinois.

Max Mathews, Graphical Language for the Scores of Computer-generated Sounds – Max Mathews, along with Losler, describe the technical features of the Graphic 1, a hardware and software system developed to enable a graphical approach to Music IV.

Herbert Brün, Infraudibles – Herbert Brün opens the session devoted to aesthetics questions. The composer exposes some of his reflections for Infraudibles, a computer-aided composition realized at the University of Illinois.

James Randall, Operations on Wave Forms – Randall addresses the issue of timbre in an electronic perspective, focusing so much on perception as on the technical ones related to some subroutines designed for the Music IV.

John Pierce, Max Mathews, Control of Consonance and Dissonance with Nonharmonic Overtones – Mathews and Pierce have a report on the investigations concerning the issue of non-harmonic and harmonic relationships. They cite work of Helmholtz, Plomp and Levelt.

Gerald Strang, The Problem of Imperfection in Computer Music – Strang’s intervention, however, addresses the issue of sound construction in computer science. On the sidelines of his lecture are also presented sound experiments carried out with the Music IV at University of California, Los Angeles (UCLA).

The book, edited by Von Foerster, is accompanied by a precious attachment of four 33 rpm records that contain musical examples for the topics treated. We can find Lyric Variations (1966), by James Randall, realized with Music IVB; Sonatina for CDC-3600 (1965) and Title Music to Link (1965) by Arthur Roberts (there is also a study entitled Rocket); the second movement of Algorithm I (1967), Cosahedron, by Lejaren Hiller; Infraudibles (1968) by Herbert Brun; sounds samples by Gerald Strang and James Beauchamp and, finally, some experiments by Max Mathews and John Pierce (International Lullaby, Rhythm Developments, The British Grenadiers and Eight-Tone Canon).