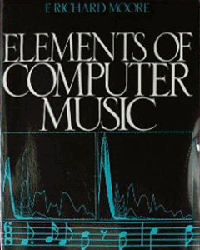 Richard Moore’s book is one of the basic texts for the many aspects of digital audio. Characterized by extreme clarity of presentation, this book is a basic introduction, as it is also understood from the title, to the many aspects that concern the computer music.

Through its five chapters and four appendices full bodied, Moore faces many topics both scientific and purely musical. The Moore’s book, as in other publications on computer music, is related to the use of a language or a specific software. In this case, the numerous examples of the different techniques of sound synthesis or sound spatialization, refer to Cmusic (a Music N software family, developed for the CARL System at Computer Audio Research Laboratory, San Diego) which was developed by the same author in the early eighties. Cmusic remains the reference tool for the many examples of information that the author carries within its own publication.

After the first chapter of an introductory nature, Elements of Computer Music deals more closely the various aspects of digital synthesis. In the second chapter, in fact, the author talks of sound representation and sound digitization, then of digital filters characteristics and of spectrum measurement, everything is dealt with more rigorously digital perspective.

In the third chapter dealt with some basic sound synthesis techniques such as additive, subtractive and physical models. Moore gives examples of implementation of these techniques through the use of Cmusic. The fourth chapter, however, concerns the different techniques of spatial and, more generally, the behavior of sound in space. For this reason, the author also talks of echo and reverb.

The fourth and final chapter deals with the different compositional approaches. The topics covered range from applications of Markov processes to the use of probability theory; from the use of random techniques in music to algorithmic composition.

The book ends with a series of four appendices which can be considered as utilities for the composer of computer music. Apart from that dedicated to Cmusic and its syntactic and techniques features, other appendices concern aspects much more general: what are the different types of tuning and the main mathematical and algebraic useful for computer music. Compared to the latter point it must be said that all the text is always full of mathematics, though stated with great simplicity.
Because of its great clarity, Elements of Computer Music is a book recommended to those who come for the first time in the discipline. This book stands as a valuable tool for guidance while characterized by a draft that, in its simplicity, is very detailed and professional.