After the realization of EMS Synthi 100 hybrid synthesizer, Peter Zinovieff and colleagues of the Electronic Music Studios in London, decided to make a new version, easier than its predecessor. In fact, although the EMS Synthi 100 had received good feedback by musicians, it was a machine very complex in terms of size and installation, as is shown by the photo below:

This picture shows us all the equipment of the Electronic Music Studios in London. Apart from a few devices (on the right side from the first of the two Ampex, and the Synthi ASK on the left) everything was an integral part of the EMS Synthi 100 system.

News – The idea was to lighten the computer part of the previous system, so as to make it less demanding its installation in those centers that they would feature. The issue was of great importance, and David Cockerell sums it up nicely with a consideration which points out that already only for the Synthi 100:

You had to take walls down to get it into studios [Vail, Mark]

It should be noted that the Computer Synthi would replace only the part of computer, and would continue to lean on the Synthi 100 for the production of sound, exactly as was done for the EMS Synthi 100. This would prove to be a failure element.

Peter Eastty – Equally failed, was the idea of involving ​​Peter Eastty in the project; he was commissioned to design the interface. The work on the new machine started in 1975, but in 1977 he was called to the new Ircam in Paris, and for this he was forced to abandon the work under construction. According to some, this would compromise the future of the Computer Synthi, in reality it seems more evident that the reason he went and looked in its excessive costn and in its being closely tied to a machine as complex and expensive as the Synthi 100. 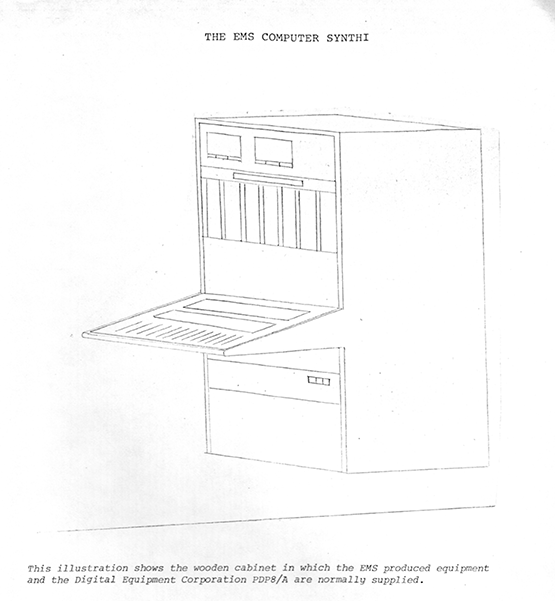 This image, taken from a brochure of the EMS, shows an outline of how it should be the Computer Synthi: mounted in a single rack, which should correspond to one quarter of the Synthi 100, the control section above and the PDP -8 in the base. At the top were designed housing for the magnetic tape cassettes.

What is certain is that the departure of Eastty not contributed to the success of the Computer Synthi, which will be realized only three prototypes (available at Glasgow, Paris and Oxfordshire), the only realized up to the failure of the Electronic Music Studios in 1979, on which this project seems more than a little engraved, at least according to some sources.

Features –  The initial idea was to build a sophisticated machine, but the differences between that idea and prototypes were many. First of all the size: Computer Synthi should have occupied a quarter of the Synthi 100, but it was realized large as one half.

Beyond the differences, the idea was to bring together in one machine both the computer and the device for its management and for control of the Synthi 100. The system included: 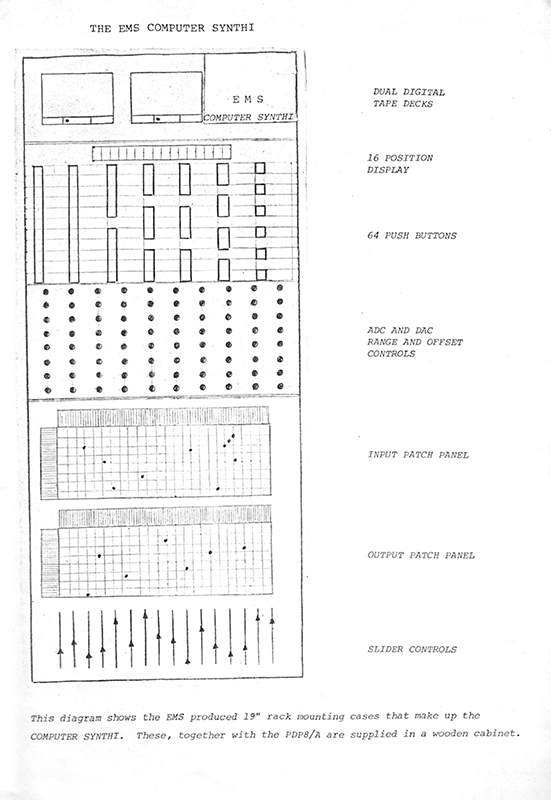 This other picture shows us another two-dimensional draft as it should be the Computer Synthi, and it deepens the top, indicating the different components.

Basic System – The power of the PDP-8 gave rise to two different configurations of Computer Synthi. The first called Basic, the other Musys. The difference between the two versions was the number of software with which the system was equipped. The Basic version, in fact, was characterized by a machine is not powerful enough to allow the use of the Musys package. Were provided so only programs with the general functionality and simply called Sequence Editor, Modify, Keyin, Linearise and Tune. Many of the operations that allowed these programs can be deduced simply by the name.

Here’s how it looked the Computer Synthi in a preliminary draft, most recent in respect to the previous images.

Musys System – For those desiring a no-limits synthesizer, there was the possibility to opt for the Musys version, named after the software package already developed for the Synthi 100. Bearing in mind that the most important aspect of Computer Synthi was given by its great improvements that had been made to the management software it is clear that the choice of which version to buy would be almost obvious. Almost; because between the two systems, there were interesting differences in price: 16,000 pounds for the Basic and more than 21,000 for the Musys.

On the left of this picture (I think it captured the interior of the Great Milton Study of EMS) one of the three prototypes of the Computer Synthi. Are rather obvious the differences compared to the proofs presented above. On the right you can see the Synthi 100, for which the Computer Synthi was realized​​.

Looking at the numbers, maybe you better understand some simple concepts expressed above: the failure of the first Computer Synthi before, and that of the Electronic Music Studios, then.

Candlish, Nicola Anne. The Development of Resources for Electronic Music in the U.K., with Particular Reference to the Bids to Establish a National Studio, Durham theses, Durham University, 2012.