Warning: Parameter 2 to wp_hide_post_Public::query_posts_join() expected to be a reference, value given in /web/htdocs/www.musicainformatica.org/home/wp-includes/class-wp-hook.php on line 287
 Phrase – musicainformatica.org Skip to content
Home » TOPICS » Phrase

Phrase is a software developed in the mid-Seventies by the computer music pioneer Lejaren Hiller. He used it for compositions such as A Preview of Coming Attractions (1975), and Persiflage for flute, oboe and percussions (1977).

The most important novelty of this software, as Hiller underlined those years, was the possibility to compose musical themes, melodies, motifs or simply musical phrases, as suggested by the name. Another interesting feature, underlined by Hiller in a 1985’s paper, was the fact that Phrase allowed to processing and combined also musical microstructures, unlike others software limited to manipulate only single sounds.

This last feature is linked to a more complex musical concept that Lejaren Hiller exposed in the previous years with the Illiac Suite experiments. Indeed, the “composer chemist” affirmed the importance, in the context of a musical composition, of hierarchical structures; capable of making some musical events more important than others. Phrase was developed in accordance with this logic: match musical elements through a hierarchical approach.

The idea of a hierarchical approach was not so new. The Austrian musicologist Heinrich Schenker had already adopted this approach; although Hiller didn’t know him, could appreciate his theories thanks to Hubert Kessler, with whom Hiller completed his studies from 1953 to 1956. 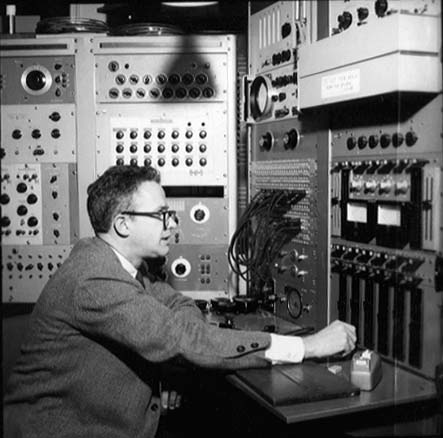 Schenkerian theories was implemented in Phrase through three different algorithms: the first useful to design musical textures (a process that Hiller called Free Flow); the second useful to write melodies, phrases or musical motifs to imitate and combine (Phrase Assembly); finally the third algorithm useful to edit and vary all the musical elements (Imitation).[1]

The composer has the task to choosing among these process and the data to use with each of them. The composer, then, is entrusted with the final creativity process because, as Hiller remember us, Phrase has not the ability to choose a particular musical genre rather than other, as well as it has not the ability, in my opinion, to compose music by itself.