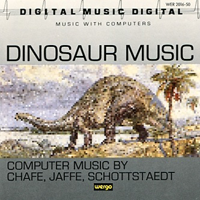 Dinosaur Music collects some work in computer music made at the CCRMA of the Stanford University between 1982 and 1986. The special feature of this collection is the fact that all the songs were made with the Samson Box digital synthesizer.

The first track of this CD is In a Word (1983) by Chris Chafe, produced and performed for the first time at Stanford University. Born in Switzerland, Chris Chafe is a composer and cellist who, in the eighties, became interested in digital technologies both from the perspective of the composition and performance. In some way the song in this collection reflects well this dual interest of the artist, since it is a work for cello and digital sounds, used according to accompany the parts played by the cello of Chris Chafe. For the digital part the author has relied on Samson Box synthesizer, through which he performed in real time the score made with Pla. The material is inspired by the singing voice timbre, as is evident right from the opening bars, within an overall structure that favors the merger between the two sound sources rather than a play of contrast. The work of synthesis ranges from moments of vocal imitation of human phases, especially in the closing stages, in which the synthetic element is more evident. Scattered along the entire course of the song short digital sounds break occasionally sounds expanses of type voice.

The combination of synthetic sounds and instrumental is hardly a novelty in the field of electronic music, and not digital. So how, in terms of timbre, the sound of this specific piece does not add much new. Quite different, however, is the second work in this collection produced by Wergo: Silicon Valley Breakdown (1982) by David A. Jaffe.

The starting point of this work is the American folk tradition of blue-grass. This kind of music is taken as a reference model at different levels of composition: first, it is inferred the instrumental ensemble, obviously transposed on a digital piano. This kind of music, born around the forties, has its own very specific character compared to the organic, usually consisting of four to seven musicians that can be singers or instrumentalists. In the latter case, favored the use of stringed instruments such as guitar, banjo or mandolin. This is the first feature of the work of David Jaffe: the sounds produced synthetically follow those of several stringed instruments that within the composition of Jaffe met sometimes in a single organic or fragmented into smaller groups. The tradition of blue-grass, then, is revisited through the mediation of a specific song, the traditional Shenandoah Valley Breakdown (suitably modified by the adjective Silicon given the digital nature of the instrument used). This is constantly mentioned in the song, or used as a generative melodic core of subsequent changes.

The last aspect for which the blue-grass is configured as reference model is rhythmic. The traditional genre presents denoted by a certain speed the pace that David Jaffe pushes up exasperation. This, indeed, is perhaps one of the most interesting aspects of the composition. Computer use stimulates the author to groped the execution speed beyond the limits of human possibilities, managing at the same time to obtain solutions timbre very interesting, as the minutes between 6:45 and 7:25 or between 17:19 and 17:31. The extreme speed of the sound material, also returns a character hectic work that appears in turn exasperation of that vitality characteristic of the traditional blue-grass music.

The entire sound material of Silicon Valley Breakdown, which lasts for almost twenty minutes, was synthesized through the Samson Box. The realization of the sounds is based on studies conducted by Kevin Karplus and Alex Strong on digital synthesis of string instruments (Digital Synthesis of Plucked-String and Drum Timbres, published in 1983 on the Computer Music Journal). Later, the same David Jaffe, along with Julius Smith, has created variants algorithm developed by Karplus and Strong, adopting the complex of these techniques to synthesize the sounds of Silicon Valley Breakdown (Extensions of the Karplus-Strong Plucked-String Algorithm, Computer Music Journal, Vol. 7 [2], 1983, pp. 56-69).

The version presented on this CD, produced with the synthesizer Samson Box, was readjusts for two channels compared to the four adopted in the original. One aspect not insignificant since the spatial sound, even at this reduced stereo, has worked as a characteristic element rather than boundary element or effect. Silicon Valley Breakdown was awarded in 1982 at the Venice Biennale in 1983 and the International Newcomp Contest.

The collection of Wergo closes with three songs written by William Schottstaedt. He graduated in composition at the University of Stanford, Schottstaedt is also committed to the development of new software, among which Pla and Common Music. The works presented on this CD were written between 1984 and 1986: Dinosaur Music (1984), Water Music I (1985), Water Music II (1986). All three are characterized by some technical specifications: were made with synthesizer Samson Box, designed for a spatialization of four channels (in this case also the version on cd was readjusts to a stereo system) and are based on the use of a single synthesis technique, the Frequency Modulation, through which Schottstaedt realizes sounds similar to those of a violin overlapping refer even to those of a pipe organ. The synthesis algorithm was implemented in 1976 in collaboration with John Chowning.

The first track in time but the last in the collection is Dinosaur Music. This work is characterized, compared to the following, first for solutions timbre more varied that also open to moments of percussive. The song opens with a sort of leitmotif consists of a rapid and random sequence of sounds related to a coda. On the tonal sequence of sounds reveals their digital nature, while the tail is initially processed as a superposition sound consonant then, in subsequent reworkings, is replaced with a carpet of white noise. Another interesting element is the repeated alternation of energy zones contrasting with falls of intensity that often reach dramatic.

This last aspect also characterizes the two subsequent works in chronological order, Water Music I and II Water Music. These among themselves of very similar characteristics, with sound and wide expanses. Water Music II seems to be closer to the characteristics of Dinosaur Music although overall we have the impression that the three works Schottstaedt are not totally unrelated to each other but rather a kind of evolution that leads to fulfillment or extremes some characters in the musical transition from one track to another. In light of this reading Dinosaur Music, in my opinion, is the song more interesting.