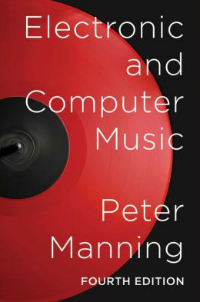 Peter Manning is author of a book become rapidly a reference text for those interested in electronic music as well as computer music, to which Manning devote a large section of his book.
I think that those interested to write a book on electronic music, in particular by a historical point of view, have a first main problem to be solved, first of all: how categorize the general topic? So that the reader can understand the general problem but even examine specific questions in-depth. The question I know seem to be a banal issue, a negligible consideration. However, anyone interested in music history, should know how the electronic music history has been categorized in various ways, unlike classical music or even pop/rock. These last, accustomed us to a chronological classification of the most important topics, calling our attention to the most famous composers or to the compositions appreciated as the most beautiful in the music history. If we consider some important books of electronic music history, we can underline transformation not only for the music instruments adopted by composer but also how electronic music is studied by musicologists.

Elliott Schwartz, for example, in his book Electronic Music: A Listener’s Guide (1973) classifies first the general topic in three main categories, in chronological order, then, each of them, in others subcategories in according to the instrument adopted (could be the computer or tape) , to the musical genre (rock, pop, experimental, etc.) or to the electronic studio where the composer worked.

David Ernst, author of another famous book, The Evolution of Electronic Music (1977), prefers an articulation around performance and composition issues. So, begins with a first partition based on the ensemble (tape music, music for tape and performers, live electronic, and so on), then, if it is music for tape and performers, realizes a new partition taking in to account if there are, in conjunction with  the electronic medium, only voices or even traditional instruments; if the composer used only synthesized sounds or even concrete sounds.

Similar, is the classification of Jon Appleton and Ronald Perera in the book titled The Development and Practice of Electronic Music. The authors preferred a more severe articulation, based only on the type of electronic instrument adopted, without any sort of subclassification. So, a chapter is devoted to tape compositions, another to works for synthesizer, and finally a chapter devoted to computer music compositions.

I think the Peter Manning’s ability to mediate between these different position, together with his expositive clarity and the trustworthy reconstruction of historic facts, is one of the reasons which have made this book a reference text for those interested in electronic music. The 4th edition, published in these months of 2013, I think it is another demonstration of the importance of this book.

The main differences among the 1985 edition and that of 2013 concern, as obvious, primarily the computer music. If in the first edition it was completed with a single chapter of fifty pages, in the recent edition the same topic require over three hundred pages. So, the general topic of the computer music is treated over five chapters to examine in depth the various matters relating to the use of computer in the musical context.

In the 1985 edition, Peter Manning wrote a detailed account of the early history of computer music until the Seventies, stressing the most important composers and the principal works they composed. In the latter edition, more technical issues were faced, as the digital audio properties or the MIDI protocol; that is the basic topics that every aspiring musician, today, should have; in my opinion.

Electronic and Computer Music is a book that every music library should have. For this, you can find many links to this book, but now the 4th edition is available only in preview mode while the 2004 edition can be found rapidly, as I did: