Patchmix is a graphical interface, developed in X and C++ language, designed to facilitate the construction of virtual instruments, compatible with the Cmix, software of the Music N family developed by Paul Lansky.

Brief history – Patchmix was developed by Mara Helmuth at Computer Music Center of Columbia University in New York, in the early nineties. For its realization has been used mainly X, an object-oriented programming language similar to C. The goal of PatchMix is to facilitate the use of Cmix, developed by Paul Lansky, simplifying the construction of new synthesis algorithms, allowing the development of new Units Generator even those not particularly familiar with C programming. All this has made Patchmix a very useful tool in education as well as the composition of computer music. In developing PatchMix the intention was also to propose, in digital domain, a modular approach adopted with analog instruments.[1]

Operation – Feature of this program is a graphical representation of UG in form of flowcharts. Once completed the flowchart, this could be converted into a code executable through Cmix.

Graphical structure – The graphical structure of Patchmix is divided into three sections: a menu for the UG selection, a working area for the flowchart assembly and a panel with commands to build tools for Cmix and act on sound files. The picture below is a sample screenshot of PatchMix: 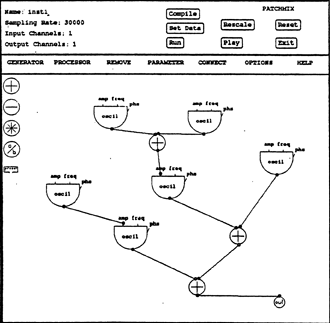 Subsequent developments – Mara Helmuth, after the first version in 1990, has continued to developing PatchMix. A first significant change was noted in 1991. In that year, Helmuth develops StochGran, utility that allows to use granular synthesis with Cmix. For this reason PatchMix was made available for NextStep operating system and interfaced with the new software for granular synthesis.[2] Later, in 1997, the staff gathered around Brad Garton, has made a Cmix real-time version: RTCmix. Because of this newness, Mara Helmuth in 1999, has realized a new version of PatchMix, compatible with Silicon Graphics platforms and interfaced with the old version of Cmix and with the latest RTCmix.[3] The main features have remained roughly unchanged, apart from the presence of a new graphical interface: 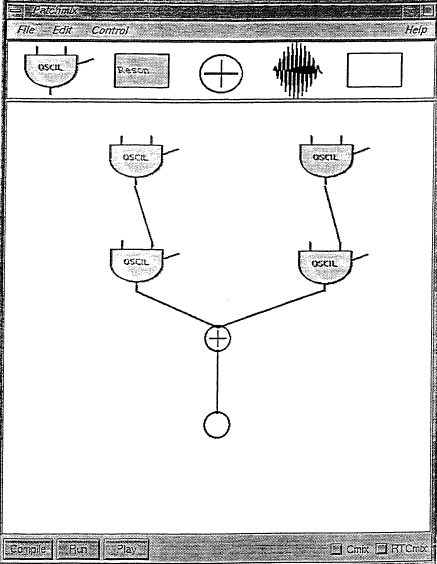