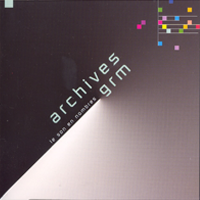 In 2004, to celebrate thirty years of the INA, the Groupe de Recherches Musicales promotes publication of a collection that documents the musical activities held at the center in Paris. Five compact disc telling not only of the many composers who have contributed to the history of the center dedicated to musique concrete, but it’s also a way to explore the development of technological tools used at GRM. In terms of computer music, so it is interesting to talk about the third and fourth volume in this collection. The third CD, entitled Le son de nombres, documents the partial composition activities carried out thanks to Studio 123 computer music software package. Therefore it is a work conceived through the use of software designed for the deferred time. The fourth volume, however, is entitled Le temps du temps reel and focuses, as the title suggests, the creation of computer music in real time.

This collection opens with the first work composed through the Studio 123 software package. This is Eros bleu, a movement taken from Erosphere (1979) by Francois Bayle. In this excerpt you can hear synths paired with concrete sounds produced by different techniques. At various times in this track, the original material is performed on the contrary, obtaining interesting timbral effects.

The second track, however, was written by Austrian composer Dieter Kaufmann. Voyage au paradis (1987) is characterized by the use of a female voice recites in German. The vocal material, which are applied reverb and echo, is subject to various sound processing which are flanked synthetic sound.

In the collection also has Jean-Claude Risset with the second movement excerpt from Sud (1984), a work commissioned by the French Ministry of Culture. In this work Risset uses both concrete sounds processed by Studio 123, both synthetic sounds. Something similar can be done also for the extract from Week-end (Homage to Wagner) (1982) by Ivo Malec which, together with Studio 123 software, using three synthesizers. The structure of this work has three movements. This is a very interesting work for its timbres solutions, although it uses a limited number of sound processing (resonance effects, stretching and transpositions). Its structure also is characterized by a sharp contrast between the first section, very full bodied in terms of sound, and a final coda that appears gaunt and with a much lower volume.

The work of Dennis Smalley, Wind Chimes (1987), was carried out in two different phases: first, the author has done sound processing with Studio 123 software package, used to modify concrete sounds taken from a broken glass. Smalley’s work was finished a year later, and surprisingly, even today, the sound quality and cleanliness of the final result, given also the limitations of the tools of those years.

The work of Gilles Racot, Anamorphees (1984/85), was born, however, from a project of computer music wished by Benedict Mailliard, aimed to exploring the potential of software developed at the Groupe de Recherches Musicales. The Germinal project, as it was called, posed the challenge to composers to create works based on a single musical phrase or a single sound. Racot is among the twelve composers who responded to this invitation. Her work makes extensive use of spatial techniques, particularly in the second part of the song. Benedict Mailliard is also included in this collection with Affleurements (1984/1985), designed for the Germinal project. In this case, the starting material sound, audible in the first few seconds, are concrete, and then subjected to various sound processing and variously effected.

For the union of vocal material with electronic sounds, it is very interesting also the work of French composer Jean Schwarz. Quatre Saisons (Hiver) (1983) is a track on which the material recorded on magnetic tape are made by the elaboration and the continuous overlapping vocals.

The compilation closes with a work by Francis Dhomont, Novars (1989). Unlike others, this track uses not only the software Studio 123, but also the Syter, which was designed for real-time. As stated by Dieter Kaufmann, this work of computer music, comes in later years with those concerning the use of the Studio 123 package.

In the CD booklet also there is a writing of Yann Geslin, whose written traces some historical milestones that affect the implementation of the Studio 123 software package. Translated into English, the Yann Geslin writing is introduced by a foreword by Jean-Christophe Thomas.