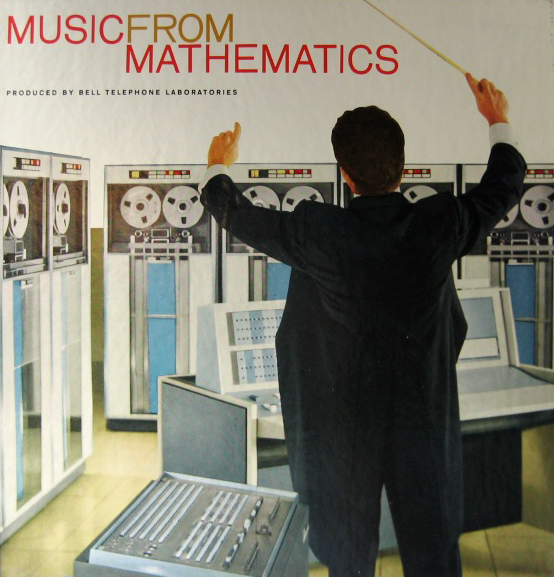 Before going into the details of this recording, it is good to clarify a precise point: in circulation there are two collections that have the title Music From Mathematics: the first, dated 1960, is the one presented in this review; the second, published two years later, has already been reviewed on musicainformatica long time ago at this link.

At the time I gave priority to the second edition because between the two is undoubtedly the best known, though the edition of 1960 contains material rather interesting from a historical point of view.

Beyond the success, what really distinguishes these two issues should be sought in the purposes that motivated marketing. If the 1962 edition can be considered an anthology that collects and documents ​computer music experiments realized at Bell Laboratories with the Music N by Max Mathews, the 1960 reveals a clear popularization intention, I dare even teaching. In fact, the editorial choices highlight the intention to explain to listeners how computer and math could be used to compose music.

There are two features that confirm this choice: the presence of a narrating voice who introduces the various experiments and takes the listener on a journey of knowledge of computer music, and the presence of a rich booklet, which is not confined to present tracks but over 24 pages explores the most interesting experiments and explains clearly in what way you can compose music through the computer and listen to the resulting sound.

Formally, this anthology is divided into two parts, the first of which consists of the A side which bears the subtitle Compositions on a Well-Tempered Computer, which collects experiments of computer synthesized music, all realized at Bell Labs. The second part, the B-side of the album, is a collection of some experiments that belong to the category of computer-assisted compositions. In other words, they are works in which the computer was used for the score generation, then performed by a traditional instrumental ensemble.

I do not want to say more about the work on the A-side, which I have written something in the review for the 1962 edition, to which I refer you for further investigation. I prefer to devote a few lines to the work of the B-side, where he certainly could not miss the Illiac Suite for string quartet, by Lejaren Hiller, considered the first opera ever composed by a computer. Equally interesting is the presence of the song Music by Chance, the result of experiments conducted by John Pierce and Betty Shannon. The interesting fact of this rare recording is that Pierce presented their experiments as prior to those conducted by Richard Pinkerton, and considered by many as the model for the subsequent experiments of the fifties.

Very interesting, for the methodology used, it is also the experiment of David Slepian for the track Improvisations On A Random Piano. Slepian assumes that the creative writing of a composer is inevitably influenced by what until that moment we heard during our existence. In a sense, says Slepian, our mind is a sort of database of styles, rhythms, harmonies, and so on, to which we draw when we have to solve a problem of composition; a feature that according to Slepian could easily be replicated in the context of a digital computer; in fact it should be noted that the methodology used by Hiller at the bottom was based on the same identical concepts.

The album is closed by an experiment of digital speech made ​​by John Kelly and Louis Gerstman, which they planned to make him a computer to synthesize the phrase Thanks for Listenting, the same gratitude that appeal to you, before I leave you with listening to the whole album:

And for those who wish to learn, I also public an extract of the booklet inside the album: